Give me a holiday we celebrate in America and I can find you myriad articles thrashing and trashing and stomping it to smithereens. 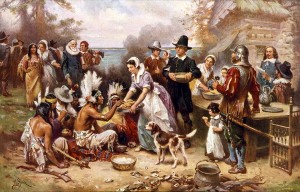 Here I was, innocently looking for a picture of a vintage Thanksgiving Feast (and yes, I know some of it is legend with the accompanying embelishments) and I come across a beautiful painting entitled “The First Thanksgiving” with the text over it “Don’t Believe the Hype”.

We’re not to believe the hype, because one United Native American Bureau (which oddly I can find no references to outside of pages that mention this story) offers its own explanation of how Thanksgiving came about:

The year was 1637…..700 men, women and children of the Pequot Tribe, gathered for their “Annual Green Corn Dance” in the area that is now known as Groton, Conn. While they were gathered in this place of meeting, they were surrounded and attacked by mercenaries of the English and Dutch. The Indians were ordered from the building and as they came forth, they were shot down. The rest were burned alive in the building.

I went “Snopin'” around.  Nothing on Snopes.   But this seems to be a reference to the Mystic Massacre. Which happened May 26 of 1637. The “Next Day” would have been May 27. None of this seems to have anything to do with three-day Pilgrim/Indian harvest feast in 1621. Clearly the massacre had nothing to do with the holiday we know as “Thanksgiving”. So what gives?

Severian is the one who enlightened me on Critical Theory (there are actually Critical Theory Dictionaries – and I actually bought one. Enlightening) … and this would be, to my mind, another story in the attempt to discredit western culture to foment the kind of Revolution … er, “Fundamental Transformation” our self-proclaimed betters would like to see and that their virtue-junkie followers blindly and happily help them along with.

To the casual reader, this story affirms the narrative that white Christian Europeans just love to kill them some brown people at will, because, you know, they’re not white, and stuff. Here were the peaceful Pequot, peacefully celebrating their harvest festival (upon which our Thanksgiving is based … I think about every culture has one. In England, it’s called Harvest Home and goes back to ancient times) … anyway, there they were performing the Green Corn Dance, when out of nowhere, for no reason at all, the Puritans (known for their bloodthirsty ways, dontchaknow) just attacked and killed them all … because, I don’t know, they were all brown heathens or something and God wanted them to do it.

Yeah, the Bureau kind of implies it here:

These Puritan Pilgrims saw themselves as the “chosen elect”, from the Bibles’ Book of Revelations and traveled to America to build “The Kingdom of God”, also from Revelations. Strict with the scripture, they considered an enemy of anyone who did not follow suit. These beliefs were eventually transmitted to the other colonists, and the Puritan belief system quickly spread across the New England area.

Only that’s not the real story at all, and the real story has jack squat to do with Thanksgiving other than — IF the story about the Green Corn Dance is correct — the Pequot were then celebrating their harvest festival (which would mean they celebrated it in May?)

So who were these “mercenaries” of the English and Dutch? Why, it turns out that they were the Narragansett and Mohegans (and other Indian tribes). Who had long been enemies of the Pequot. Contrary to revisionist history, the Indian tribes here in America didn’t just live peacefully with each other. They fought each other frequently over lots of things. And these mercenaries allied with the colonists in a war … what? There was a war going on? There’s no mention of that, in the Bureau’s story either!

So … a little context:

In the 1630s, the Connecticut River Valley was in turmoil. The Pequot aggressively worked to extend their area of control, at the expense of the Wampanoag to the north, the Narragansett to the east, the Connecticut River Valley Algonquians and Mohegan to the west, and the Algonquian people of present-day Long Island to the south. The tribes contended for political dominance and control of the European fur trade. A series of smallpox epidemics over the course of the previous three decades had severely reduced the Native American populations due to their lack of immunity to the disease.[7] As a result, there was a power vacuum in the area. The Dutch and the English, from Western Europe, across the Atlantic Ocean, were also striving to extend the reach of their trade into the interior to achieve dominance in the lush, fertile region. The colonies were new at the time, the original settlements having been founded in the 1620s. By 1636, the Dutch had fortified their trading post, and the English had built a trading fort at Saybrook. English Puritans from Massachusetts Bay and Plymouth colonies settled at the newly established river towns of Windsor, Hartford and Wethersfield.

Oh, yes indeedy, there was a war going on, and the Pequot were not innocent noble savage bystanders.  (Seriously, RTWT)

Thanksgiving is a beautiful holiday in the tradtion of Harvest Home and … the Green Corn Ceremony.. It recognizes that we have much to be thankful for — in the bounty of the Earth, what God provides, and the most important things in our lives — friends and family.  And it commemorates an early, peaceful, even friendly cross-cultural, cross-racial celebration in this country.  They partied together for three days!  That’s a good thing!

It rivals Christmas in its traditions and pageantry, connecting the present with the past.

We don’t need to be hatin’ on Pilgrims. Or Indians. There’s no hatin’ involved.