“… conservatives tend to take a basically pessimistic view of human nature.  People are conceived of as being corrupt, self-centered, lazy, and incapable of true charity.”

Close! Conservatives actually do take a pessimistic, or “tragic”, as Thomas Sowell puts it, view of human nature. The list is basically correct except for that last piece, “incapable of true charity.”

On the contrary, TRUE charity is what an individual chooses to give of himself to others. It is progressives who think individuals are incapable of true charity and therefore it must be coerced by the government. Forced “charity” is not true charity. It is not charity at all. And it will always be taken advantage of by multitudes who do not warrant it.

Conservatives do not oppose change. They do oppose change simply for its own sake, though. As a matter of fact, what is now referred to as Conservatism is actually the most Liberal idea ever unleashed regarding society on this planet: that people are sovereign and the power to govern is subject to the consent of the governed. The tragic view of humanity, that men are not angels and that power has a tendency to corrupt is exactly why our Founders crafted a system designed to keep as much power away from central government as practically possible. 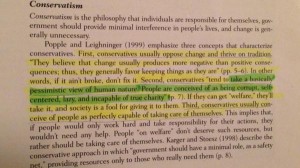 They do not think that everyone is perfectly capable of taking care of themselves, though they do believe this should be the default expectation. There are certainly exceptions, and they believe that it is first the responsibility of the family, then the community to see to it that these exceptions are taken care of.

However, progressives tend to

“confuse[] the distinction between government and society. As a result of this, every time we object to a thing being done by government, the socialists conclude that we object to its being done at all. ” (- Frederic Bastiat, The Law)

Which is why progressives tend to favor a system where ultimately everything is in the state, and no human or spiritual thing exists, or has any sort of value, outside the state.  There is no room for religion, no room for personal property, no room for homeschooling, or private education that does not conform to the state’s standards, no room for the individual (except, of course, for those “expert” individuals at the top – but they never admit this).