I’m not a Sean Hannity Show fan … matter of fact I really can’t stand listening to it, though I catch snippets in the car from time to time because I’m too lazy to change the station on the 7 minute ride home (and there aren’t any other stations these days I’d like anyway).  A lot of it is because even though he’s got truth and reason on his side, he can’t seem to focus enough to destroy such a weak guest as Betsy Rodriguez of Green Front, apparently formerly of the ill-fated (because nobody wanted to listen to it) Air America … on “Climate Change/Chaos/Warmening” … Man Bear Pig.  But this isn’t really about Sean, who I probably agree with on a majority of things … it’s about this.

Her whole argument, and I’m not exaggerating here, was this:

The most telling… when the East Anglian University emails were brought up….

So pretty much ridicule and buzz-word dropping and repeating that debunked 97% Climate Scientist claim.  I especially loved “fossil fools” and “deni-o-saurs”.  Which is why I came up with Al-warmist (An Al Gore Warmist Alarmist).  To kind of answer that kind of stuff. They’ve been at it longer, though.

And of course, the vehement dismissal of Climategate and an almost panicked urgency to NOT talk about it.

In the end, though, rather than forcing her to stay on topic and defend her positions against cited facts, the conversation went on to less relevant tit-for-tat even though Sean had a well-informed guest who could have destroyed her on air if he’d been given a chance to speak without her interruptions and Sean changing the subjects so quickly.

A friend asked what is going on with people when I pointed at this.

I thought about it a second … since I’d already given it some thought earlier today* …  and came up with this:

A splintering of people into aggrieved groups looking for badges to wear to garner respect from people they think they should respect and therefore you should too.

You don’t have to be honest and work hard and be reliable and fair and kind. You just have to hate the right people. 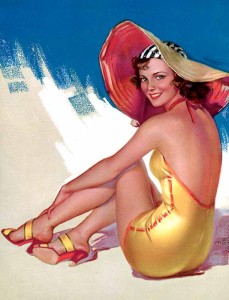 Yet another haughty disparaging screed against Miss America/Universe/Vogon ….

American needs to lighten up.  Or — I should say, the self-anointed intellectual elite does.  Most of the rest of us never got all heavy about it.

I find it amusing in a sad way that lots of people stumble all over themselves to show everyone how non-judgmental they are by judging others, say, for making judgement they feel should’t be being made, even when people line up to do it voluntarily. “Hey, do what makes you happy. Follow your dreams. Unless it’s THAT!“

We have here a bunch of people voluntarily self-selecting to compete in a contest where they will be judged based basically upon their physical beauty. And physical beauty is a thing — it exists in nature, it exists in flowers, trees, dogs, horses, and human beings. It is only one aspect of these things, but it is an aspect.

We have foot races, but nobody competing in a foot race is being dehumanized by reduced to his or her physical speed. You can extend this to pretty much all of track and field. And in aggregate, any sport.

Is the “best” guitar player in the world dehumanized by focusing on his or her ability to play the guitar? No. It’s only one part of the person. But it IS — undeniably a part.

Beauty pageants say pretty much nothing about how women are viewed in America or anywhere else today other than the fact that they are widely considered by people of both genders to be the fairer sex (which is why it is far more widely watched by both men and women than the Mr. America competition — which exists — but virtually nobody whines about). That’s just an aspect of being human — the appreciation of beauty — and both sexes tend to agree on it. The proof is that it is observable in every significant human population anywhere in the world.

Women and men are sums of the many aspects that make each of us up, and physical appearance is one of those aspects. My wife and most other women I know will comment on how beautiful particular women are. To ignore this, in fact, is DE-humanizing.

Women are, everywhere in the human race, valued partially for their beauty by both genders — moreso than men.  Because it is a quality that they, as a group, have more of. Fortunately, beauty is in the eye of the beholder, and they are, like men, valued for many other things as well, and we choose our partners and friends accordingly.

It is one thing to sit and publicly pass judgment on random people, though all of us do it privately all the time. But these contests — they aren’t random people. They are there specifically to be judged on their beauty. It’s not like a big shock at the end, “hey, just kidding, we really wanted to know how well you could answer a question where the pat answer is ‘World Peace'”.

They do throw these things in to make sure you’re “not just a pretty face” (or body) but it IS about physical appearance and everybody knows it and there’s absolutely nothing wrong with it.