Had a conversation with a friend the other day whose spouse is a professor.  Every year graduate students look to take “reading” courses and they need a professor to set guidelines, assignments, expectations, and an eventual grade … and this professor would typically take on a couple of these students per semester.

This did not sit well with other professors in the department.  They wanted him to stop … because it made THEM look bad for NOT doing it.

I also know of a woman who cleans apartments in a retirement home for a living.  Tipping is not expected, but some people tip her.

This upsets some of the people living in the retirement home who maybe can’t afford to for not tipping because they feel it makes them look bad.

So they would rather not have people tip this woman, who probably doesn’t make that much money and really appreciates the extra money and who probably understands all to well what it is have limited funds and not be able to afford things — so that they won’t feel bad.

It occurs to me that this is the mentality that drives the liberal drive to the bottom – away from encouraging people to do their best and toward mediocrity.

The liberal solution to this would be for the government to step in, take a mandatory amount of money from certain people, more from those who have more money, and redistribute it to the woman – now in the form of an entitlement and not a reward for a job well done, where the people the money is coming from have no say in how much they “tip” — all so that people who can’t, or people who won’t — can feel better about not doing it.

You see how this attitude drives society down instead of up? 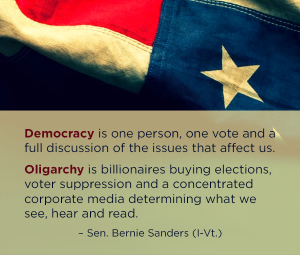 Still, he’s sort of right here – but he’s using a little sleight of hand, and leaving out something very important.

We don’t really have a Democracy. Democracy would be bad, and our founders knew it. Democracy is two wolves and a sheep deciding what’s for dinner. A Republic is a well-armed lamb contesting the result.

Still, we do have a Democratic Republic in that we do use Democracy as a tool for input into the system as long as what is decided doesn’t violate the inalienable rights of others (life, liberty, property being the big three).

And there is no question that for it to work a full discussion of the issues that affect us is necessary.

But that’s not what we get. The Daily Show and a news media that is 80% self-described progressive-liberal is what passes for “discussion” today. If we actually had real discussion no billionaire could “buy” an election by donations (they’d have to cheat the old-fashioned Tammany Hall way – actually, they kind of do, they’ve just made the ballot boxes easier to stuff). 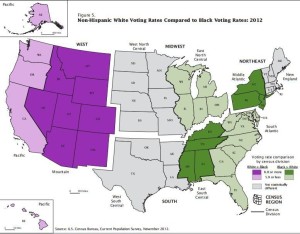 Voter suppression used to be a problem back in the day when southern Democrats passed laws literally intended to keep black people from voting. Those days are over.

However, there is a reason one party fights just about every attempt to thwart voter fraud — and that tells me pretty much everything I need to know right there. They fight such laws because it makes it harder for them to cheat. And that is how voter suppression is done today. It’s not strict voting laws that suppress votes — it’s lax ones. Every fraudulent vote in effect negates the vote of a valid voter.

It also turns out that the people who “determine what we see, read, and hear” from the media to college campuses are largely sympathetic to Bernie’s worldview – and it ain’t capitalist fat cats trying to get rich — it’s generally socialist do-gooders trying to “make a difference”.  An Oligarchy isn’t necessarily wealthy people (though Oligarchs often do become wealthy because they have the power to take people’s stuff and rig the rules) … an Oligarchy is rule by a relatively small group of people.  They could be royalty, wealthy, family, educated-elite, corporate, religious, military … but since Bernie’s a Marxist, he wants The People to fixate on the rich and be jealous and outraged.  Because that’s the road to power when it comes to Marxism.

So while Bernie is partially right here, he’s leaving out a few things and he wants you to believe that the people who are keeping you down are his opponents.

By and large, they’re not. They’re his friends.