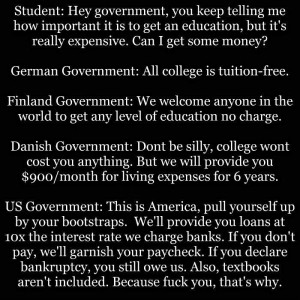 Education is a human right. Share if you agree.

So this came across my desktop yesterday.

I think my head is going to explode.Oh yeah. It’s free. *If* you’re accepted. And that’s a big IF.Even in Europe, you have to be put in an academic track school by about age 12 to hope to make it in to one of these colleges.Since this “Free in Finland” word has gotten out, Finland has had to clarify that while tuition is free, you have to pay your own way for room and board. And hey, if education is a right, aren’t food and shelter yet more basic rights?Why does Finland HATE students????! “Finland Starves Students – Leaves Them in the Cold!” That would be the community organizing headline from the Chicago school of politics.All colleges in Germany have had “free” tuition since way way back in … October. Jury’s probably still out on how sustainable it is, or the effect it will have on the quality of education you can get. As it stands, America pretty much has a headlock on top universities in the world so maybe there’s something to this not-so-public approach.
I think the main difference between America and elsewhere has been that your education was something you were expected to get — so much so that state charters mandated that a certain size plot of land in every township be set aside for a school which would be funded by the community. But the attitude was that an education isn’t something that is given to you or provided to you — since we as a people have required that you get one from the beginning, we’ve considered it a duty of society to provide the opportunity – up to a point.I’d argue that we don’t have to provide you an opportunity for a degree in “Gender Studies”. 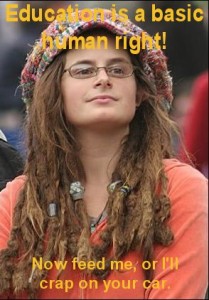 It’s not “your” car anyway, because you didn’t build that.

This provision of opportunity is there with the expectation that you will be obligated, if physically and mentally able, to go out and pull your own weight when it is said and done – and perhaps if you do well enough create something that will help others pull theirs. But to the people at “US Uncut”, it’s about “rights”, not “obligations”. “Rights” mean somebody OWEs *me*. “Obligations” are for chumps. Now feed me or I’ll cr*p on your car. It’s not really “your” car, anyway, because you didn’t build that. Oppressor!We do have an over-emphasis on a college degree as a credential in our society. College is fine — you can get a great education if you want one, and you can get lots of financial help getting one if you need it and show an aptitude for it. And I think there is something to a Financial/Education complex where they rub each others’ backs. Universities cost 5x more than they did in 1985, but inflation has “only” cut they buying power of a dollar in half. I think Universities charge more because they can get it, and banks make the loans because they can make money off the interest. Kind of like what health insurance did to health care costs.The whole “10x what ‘they’ charge banks” thing is just emotionally charged rhetoric that takes advantage of, as someone once put it, “the stupidity of the American voter”. Any amount banks get charged for loans to them is ultimately passed on to the consumer, and student loan rates aren’t out of line with most other loan rates.I think Mike Rowe & his Mike Rowe Works is on to something. Degrees are overrated, and inflated – in grades, cost, and subject matter. There is lots of honorable, even decent-paying work out there that does not require a college degree, and it’s work that needs doing.