I remember a Grateful Dead concert I attended a couple of decades ago… the line for the ladies’ room was ridiculous.  None of the men thought anything of letting ladies in line for the men’s room, and nobody was bothered.

When I lived in the dorms in college, girlfriends routinely stayed, especially on weekends, on our all-boys floor.  There was a code, too.  Even if the boyfriend was still in bed, if one of us knew a woman was in the bathroom, showering or otherwise disposed, he would post guard outside the door and shoo guys to the other bathrooms on the floor until she was done.

In a reversal of roles, I occasionally stayed with a girlfriend I once had in a women’s dorm.  A similar protocol was followed.  People were warned, I was discreet… I took my shower and left quickly.  It was no big deal.  It was a little deal. These were clearly special exceptions with real, if unwritten protocols. But it was obviously not an uncommon occurrence.  An exception was being made essentially by request of one of the residents who invited me to stay, and those to whom it would matter were made aware of this very temporary situation.

At a hotel in Eureka Springs, AR where cross-dresser events are held frequently enough that I’ve seen two of them during the last 10 trips I’ve taken down there, they put up signs outside of the restrooms welcoming the cross-dressers to the ladies room or the men’s room, essentially informing people that there might be a man in a dress in the ladies’ room or in the men’s room on a particular floor.  There are still exclusive ladies’ rooms elsewhere that can be used.

The point here being that bathroom rules are best left to the communites the bathrooms serve and not to federal, or even state agencies.  This way they can be modified and molded to accomodate anomalous situations to suit the needs of those present. And typically everyone is cool with that.  The only reason the states of Mississippi and North Carolina took this issue up in the first place is the Federal government is increasingly inserting itself into these situations — top down, not bottom up, like it should be.  It’s a blocking move.  Not ideal, but I understand the need.

Now let’s be clear. Transgender men want access to the ladies’ room for purposes of validation.  They see themselves as women, and they want everyone else to see them as women.  Access to the ladies’ room is validation of that delusion. (Frankly, most men wouldn’t give a hoot if a lady needed to use the men’s room. Chivalry is not dead.) But the vast majority of people do not share their delusion. So the activist advocates of the LGBT turned to the state to enforce the validation they desire.

Not only is this wrong, it sends us down a zero-friction slope into a giant can of worms. Because this means one thing, in the end.  That there be no such thing as a men’s room or a ladies’ room.  Because of 0.3% of the population’s desire for validation of what amounts to a delusion.  It may be a very deeply felt delusion, but a delusion it remains.

If we pass laws that specifically dictate that males must be allowed to use the ladies’ room, and females must be allowed to use the men’s room, there effectively are no more men’s or ladies’ rooms. The concept becomes meaningless at this point.  It won’t just address the trans-gendered, especially because of the additional concept of “gender fluidity” and the proliferation of gender pronouns.  “I’m feeling a bit 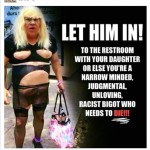 feminine today.  I think I’ll use the ladies’ room.”  And there won’t be a thing you can do to stop me.  Even if I’m not “gender fluid”, you have no way of knowing and you dare not question me under PC rules.  So … meaningless.  I don’t know that Curt Shilling meant that the caricature of a sexual deviant he tweeted out was necessarily meant to paint all transgenders in that light.  The alternate point can easily be made that you can’t keep that guy out, either.  You’ve lost any standing to distinguish who can and can’t go in there.  What used to be a safe space to do things private things at your most vulnerable – vanishes.

This is what another sector of the hard core progressive movement wants anyway. They basically want to deny differences between men and women, and they’ll use transgenderism to drive that wedge that busts it all apart. Thus we end up with unisex bathrooms.   And incidentally there goes the trans-validation once the distinction evaporates.

Now unisex bathrooms are extremely common.  Pretty much every house has at least one.  Lots of businesses, some small restaurants and bars and gas stations have what we call “one holers” where anybody goes in there and does their thing in private.

The concept of men’s and ladies’ rooms comes about when we expand the facilities, for the sake of capacity, scale, and efficiency, to handle multiple people at once.

The sensibilities of decent society laid out by The Gods of the Copy Book Headings dictated if it were going to be thus, we would sort ourselves according to gender.  And by that I mean, if you got junk, use the men’s room.  If you don’t got junk, use the ladies’ room*.

Now, when it comes to our kids, especially in schools – I and most people on the planet am for adhering strictly to the junk/no junk rule. The only way I would budge on that is if all stalls were private, and even urinals are in private stalls.  In other words, except for the sinks, towels, and trash cans — basically a wall of private bathrooms.

Ultimately I don’t see anything wrong with men’s rooms and ladies’ rooms, and I see no reason for 99.5% of the population to be pushed around due to the delusions of the other half-percent. I think they can hold that concept in their heads.  “I feel like a woman, but I got junk, so I’ll go in here so as not to disturb other women.”  That person gets my thumbs up.  You go for it. Wear that dress, or whatever, with pride. 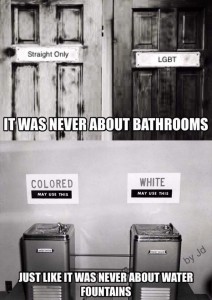 Perhaps the most ludicrous meme I’ve seen to date.

I saw a story posted yesterday with a headline saying that the NC Trans Suicide Hotline’s calls doubled after the (vile!) NC “Bathroom Law” was passed.  (I didn’t know there was a special trans suicide hotline.  Can non-trans people use it?  Just wondering.)  The first line of the article read “Being denied basic human rights, like bathroom access — has life-threatening consequences.”

This is where we are, folks. This is what they do. Nobody is denying anybody “bathroom access”. They’re just saying, for public bathrooms, if you have a d*ck, use this one.

After reading “Rules for Radicals” I would be unphased to find that there was a concerted effort to call the “trans” suicide hotline just for the headline – and I’m not being facetious. That’s exactly the kind of thing they do. Matter of fact, if it’s a “trans” suicide hotline, they could just make the numbers up for the headline.  They are the source. (And it would probably be “H8” if you asked to see their phone records.) Again, this is what Alinskyites do. It’s in the book. Which has been around for 45 years.

We’re already a long way down that slippery slope of forcing people to validate behavior that runs counter to their moral beliefs.  Let’s at least have a little decency when it comes to taking a whizz.

*If you happen to be a hermaphrodite, you are one of five one-hundredths of a percent of the population. Go wherever you feel comfortable. You’ve got a legitimate exception. We’re not making a separate restroom.  I don’t think many ladies are worried about a 5 in 10,000 chance the person next to them in the restroom is biologically ambiguous.  I would suggest that if you are dressed like a man and project a more masculine presence, don’t freak the ladies out.  You can pee next to me, and I won’t flip out.  Matter of fact, if you think you’re a lady and you got junk, you can go ahead and pee with me, too.  I won’t comment on your fashion choice.  Well unless I think it’s a good choice.

You know, “if you don’t have anything nice to say”… momma taught me well.