Yeah, a whole bunch of us who are supposedly (because of our political alignment) too macho (“not man enough”, in their view) to vote for a woman voted for McCain because of Palin, in spite of our disdain McCain. So it fails in its intention right there. They’re beating a dead horse. Fighting an SJW battle that was legitimately won long ago. Just setting it up so if she loses it will be because “patriarchy”. Yawn.

Next, we’re looking at a guy with perfectly quaffed hair combined with what I believe they call “ironic facial hair” in the “lumber sexual” style, who has covered himself in tattoos … I’m guessing because he realizes he’s not “man enough” on the merits of his personality so he compensates with cliche “tough guy” visual social signals. He probably arranges flowers. (Not that there’s anything WRONG with that.) 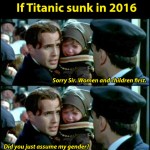 Last, but certainly not least, we have the arrow in “Her” pointing to … er … him? In this day and age of not “assuming” anybody’s gender where it would be downright hateful and bigoted for a woman to tell him to get the hell out of the women’s room where he’s just walked in on her — probably gives us an indication on where Hillary stands on peeing (pun intended).

And we don’t even need to go to the syphilis poster connection.  Our idiocracy is certainly infected with something.

Q: Why can’t trans people use the rest room marked with the gender they identify with?

A: Trans people using the ladies room is really not my primary concern. It’s what it opens the door to.

Q: But trans people aren’t any more likely to be predators than cis-straight ones.  So again, why keep them out?

A: I’m not arguing that. It’s actually the straight, as you say, ‘cis’ ones I’m more concerned about.

Q: What kind of straight ‘cis’ man is going to go in the ladies room just because nobody will stop them?

A: Exactly the kind you don’t want in there.