Our friend Robert posted this on HKB (facebook) … I had a comment on it that I wanted to save in case I or others wanted to refer to it in the future.  Incidentally, I once found this very fabric.  I thought about buying some and having someone make me a shirt out of it just because…. 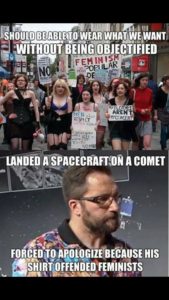 You know, when people point out that when you dress a certain way you might expect certain unwanted attention (you certainly want the attention, or you wouldn’t dress that way) and sometimes that brings along assholes that go beyond just looking … we’re not saying it’s OK for the asshole to touch you. We’re just telling you you are increasing your chances due to the nature of assholes.

If I’m backpacking in the Rockies, I wouldn’t take a pound of bacon with me and lay it all over my clothes and backpack, because I know the nature of bears. It’s a danger to me whether it should be or not.

And no, I’m not comparing all men to bears, I’m comparing assholes to bears, because both will engage in behavior I wish to avoid, and I have some control over how much and what kind of notice they take of me.