Despite my speculations yesterday, the “NASCAR Noose” incident wasn’t a hoax. No no — it was far, far dumber than that. It turns out that someone, it’s not yet clear who, decided that an ordinary garage pull rope “resembled” a noose. Here it is: 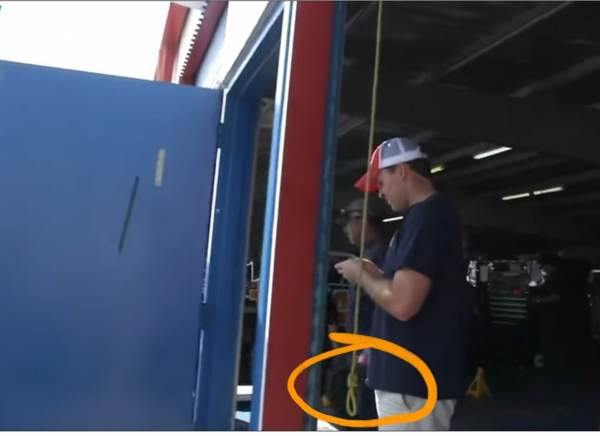 Far be it from me to suggest that Mr. Wallace, who evidently isn’t very good at racing*, reported the “noose” himself as a cheap publicity stunt. If anything, my money would be on NASCAR itself reporting it. They’ve gotten some bad publicity of late, and what better way to jump ahead of the Ostentatious Twitter Virtue Parade than calling the FBI on themselves?

(Actually, I really do kinda hope they did this. You’ve evidently decided that “people who hate the kind of people who would actually watch NASCAR” are your real audience — as opposed to, say, folks who actually enjoy watching car racing — and nothing gets their thighs moist faster than a good racial hoax. Slick marketing, guys. But I digress…)

Rather, the interesting thing here is the information, presented as a throwaway in one of the “news” stories, that the FBI team investigating the fake noose had fifteen guys. Fifteen!!!

Now, part of that was marketing on the Feeb’s part, of course — they take incandescently obvious bullshit racial hoaxes very very seriously down Quantico way. But, like NASCAR phoning the “noose” complaint in themselves (if, in fact, they actually did), this is the kind of marketing that kills you in the long run.

Elliott Ness had like three guys with him to take down Al Capone’s entire Mafia empire. The slick ultramodern FBI needs fifteen to determine that nope, an ordinary garage pull rope — $4.95 at any AutoZone in the land — isn’t actually a tiny noose for African-American pygmies.

Regimes can survive crises of legitimacy. What they can’t survive is crises of competence.

A thoroughly illegitimate regime legitimizes itself by delivering the goods. Pick any usurper, anywhere, at any point in history — if he lives long enough to bring a modicum of peace and stability, by the end of his reign he’s God’s anointed. Then compare and contrast with the situation that got the old king usurped in the first place. Regimes can, and usually do, survive mad kings, bad kings, absentee kings. You can go down in history, in fact, as some kind of mythical super-leader despite fucking up pretty much every single one of your endeavors, so long as you project the proper air of confidence and competence.

What they never survive, almost without exception, are ostentatiously incompetent kings.

“Making the trains run on time” is one of the hackneyed joke phrases in Our Thing, but there’s a real meaning behind it, and we ought to reflect on what it is. America could survive a Donald Trump, even a Joe Biden, if the rest of the Federal apparatus were minimally competent — even, say, 1990 level competent (though they were no great shakes even back then). The longer this stuff drags on, the more obviously the government apparatus is revealed as a black joke.

*From what I’ve heard. I’d rather have a tooth pulled without anesthetic than watch NASCAR. Affirmative Action being what it is, though…

3 thoughts on “A Crisis of Competence”