for the discussion below. Check this out, via The Other McCain: 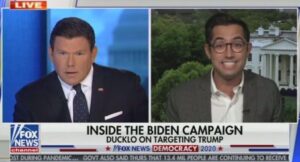 (Actually the picture is irrelevant; I just thought y’all would appreciate a good laugh. I can’t think of anyone more qualified to be Joe Biden’s communications director than that… thing. It’s even got an androgynous moniker: T.J. I think that’s technically, chromosomally, a male, but if the idea is to look exactly like a middle-aged lesbian professor at a pretentious junior college, then buddy, you nailed it).

McCain’s summary of the exchange is the relevant bit. He extensively quotes the transcript of Soyboi up there melting down when confronted with a simple, yes/no question: Does Joe Biden use a teleprompter in his interviews?

The right answer, of course — as anyone running for any office higher than “junior high class treasurer” knows — is “absolutely not.” Even though Biden very obviously does use a teleprompter, that’s the kind of admission you’d need thumbscrews and the rack to drag out of any halfway competent political operative. Dude, you’re a communications director for a political candidate… a Democrat political candidate. Lying is pretty much the sum total of your job. Just say no, and move on.

Instead, Soyboi melts down, accusing Baier of funneling Trump propaganda. Which, you know, is begging for the Streisand Effect to land on you with both feet… which, again, any competent political operative would know.

So, yeah: There’s no fucking way they let Joe Biden “debate.” If I were Trump’s advisor, I’d categorically refuse to do anything but a real, live, in-person debate… but then I’d graciously concede at the last moment to a “virtual” debate. The sight of Slow Joe obviously telepromptering his answers would be almost as good as an actual on-stage meltdown… and the inevitable Milli Vanilli incident when they try to rig it would, in a lot of ways, be even better.

In fact, the only way they let Biden anywhere near Trump, in any format, is if they’re as brain-meltingly stupid as… well, as their campaign’s communications director…

20 thoughts on “Another Data Point”