There’s some pretty stiff competition at the top, I’ll grant you, but if I had to pick the Top Five Stupidest Things the Human Race Has Ever Done, I’d go with, in ascending order:

That was prior to this week, though. When you consider that we’ve got our ongoing COVID response, a Presidential debate with Pedo Joe Biden, and now a Supreme Court nomination fight on the schedule, we might be edging into “Chamberlain at Munich” territory, idiocy-wise. It’s gonna be a wowzer.

I don’t really have much to say about the Supreme Court one way or the other. Like politicians, judges always “grow in office;” it’s not a question of if she’ll sell us out, it’s a question of when. Yeah yeah, the Constitution, but how does it make you feeeeel, Justice Barrett?

That said, if you find the spectacle of sheer bugfuck lunacy entertaining — and let’s all admit it; this is a safe space — you, like me, might need to see your doctor for an erection lasting more than four hours. Because y’all, you ain’t seen nothin’ yet.

As  hard as this is to believe, the Left haven’t fully deployed their storm troopers yet. When it comes to riots in places like Minneapolis, well… what did you expect? Joggers gotta Jog, and everybody knows it. America’s case of Chronic Negro Fatigue is terminal, and nobody expects them to even try to control themselves anymore. Same thing with the coddled college kids, addicts, and mental-institution escapees in “Antifa.” No one expects better of a “student” who’s still working on that Master’s Degree in Intersectional Poetry in his late 30s.

But the Basic College Girls have thus far been sidelined.

Yeah yeah, there are lots of double-X chromosomes out there with “Antifa,” but they’re exactly what you’d expect — 5’2″, 200lb., purple-haired, sleeve-tatted, multi-pierced fugs who make up their own pronouns. It’s no surprise why they’re incoherently angry. Thanks to their freakazoid appearance, they are, in themselves, the perfect refutation of whatever ideology they think they’re promoting.

But abortion though… that gets the Basic College Girl’s heart fluttering. And since Barrett is Catholic* and seems to mean it on that score, at least, the BCGs are going to start hitting the streets.

I guess you’ll just have to trust me on this. And believe me, I know — all the thousands of words I’ve written about the BCG make her sound like a typical apathetic, apolitical college kid. They’re out-and-proud trend-surfing herd animals, these BCGs, so why should they care about abortion? But they do, y’all, they do.

Think of it like an iPad. “Abortion” doesn’t make sense as a political issue, because BCGs don’t have politics, or issues. They do have lifestyle accessories, though, the latest and greatest ones. That’s how they compete with each other — the cutest shoes, the trendiest Starbucks drink, the #wokest attitude. Threatening to take away Muh Abortion! is, to them, like threatening to take away their iCrap Mini Pro 7.2, the one with the cute heart stickers and the unlimited data plan. It’s an identity thing, and they’re about to turn into screaming fucking banshees over it.

Which is great. If he tries really, really, really hard, your average CivNat BoomerCuck can still convince himself — see above — that the ongoing lunacy is solely the work of freaks, fugs, deviants, and ferals, the kind of people who just can’t help themselves. But he’s about to see his wife and sister and daughter go utterly fucking apeshit, all over a woman who looks like this: 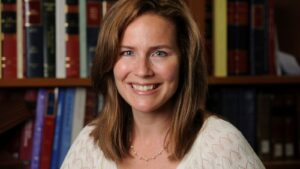 We’re all grownups here; we’ve all been around the block a few times; we know how this is going to play — no matter what they say they’re freaking out about, any person with any social savvy whatsover is going to see nothing but MEAN GIRL SHIT, in bright blinking neon. The fact that she’s adopted a few dindus, and that’s now going to be bad somehow, is just icing on the cake. Barrett looks exactly like the kind of grasping, backstabbing overachiever who stole your boyfriend in college, that bitch… or the kind of grasping, backstabbing overachiever who dumped you in college for that guy who just got into med school.

It’s going to be an epic freakout, an estrogen-soaked battle royale. Lots of eyes are going to be opened this week. Grab lots of popcorn.

*Yeah yeah, I know, they should be cheering — after all, “Pope” Francis is Catholic, and that guy is the best friend the Poz ever had. Barrett comes to us from Notre Dame, a “Catholic” institution that didn’t just swallow the blue pill, they used it as a suppository. And trust me, gang, a pozzed “Catholic” institution makes the Politburo look like a Rotary Club meeting. Unless Barrett is actually the covenanted head of the female auxiliary of The Society of St. Pius X, she’ll crawfish on us the minute the robe is on.