Introducing a new series, “Know Your Leftist” — a brief intro to a major Left figure’s work.  Caveats: 1) This is not a comprehensive overview.  2) Unless absolutely necessary, we’ll avoid technical vocabulary.  3) We’ll avoid historiography, too — we’re not going into the weeds of A’s critique of B’s deviation of C’s revisionism, ivory tower-style, because a) it’s unnecessary and b) it’s boring and c) that’s how eggheads try to convince everyone they’re smart.

Look: You don’t actually need to read these guys.  I haven’t, for the most part, and have no intention to, because their actual words don’t matter much anymore.  The “conservative” parallel is the Bible:  Lefty spews some talking point about how Jesus was really a communist or whatever, citing some cherrypicked line of scripture.  You can cite chapter and verse at them, complete with exegesis on the whole of the Gospel in question, but… does that ever work?  It’s the impression that matters.  The chestnut.  The stuff “everybody knows.”  For a certain type of person, “everybody knows” Jesus was really a socialist, and they behave accordingly.*  Thus, so many of our Leninists don’t know they’re Leninists, have never read Lenin, and wouldn’t recognize him if he sent their whole family to die in a Siberian lumber camp.  So, too, with our modern Gramscians, which is where we’ll start.  Gramsci’s actual thought is different from what modern eggheads have made of it, but as they’re the ones who are destroying what’s left of society, they’re the ones that count.

Who was he?: An Italian Marxist who got crosswise with Mussolini and thus spent a lot of time in prison, where he wrote his most important works.

What he got right: “Hegemony;” civil society vs. political society; the role of intellectuals.

Gramsci set himself the task of explaining why the Revolution not only wasn’t happening, but seemed further away than ever.  Looking at the Western world in the wake of World War I, he couldn’t help noticing that people were much better off than they were before — happier, freer, longer-lived, healthier, all of which Marx said was impossible given the late stage of capitalism.  Of course Marx couldn’t be wrong, so Gramsci theorized that the state is actually two states — the political state and the civil state — and the latter (the bourgeoisie) compromise with the former (the capitalists) to improve their position relative to the proletariat.

Those compromises take place almost entirely in the realm of culture — bourgeois values (what we call “Western Civ”) becomes “normal,” which keeps the proletariat from forming their own culture of resistance, which keeps them down.  This dominance of bourgeois culture is known as “hegemony,” and it’s perpetuated through academia, the media, etc.  Thus, Gramsci argued, Left intellectuals needed to take those institutions over, thus beginning the long march through the institutions… with what results, it’s hardly necessary to say. 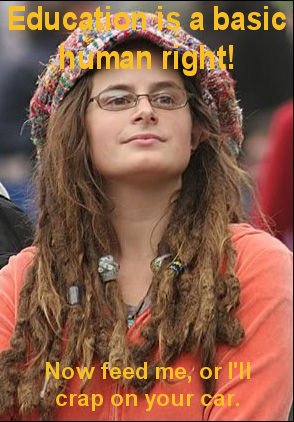 He accurately described the role of intellectuals in the academy during this process.  Infogalactic says:

Such “organic” intellectuals do not simply describe social life in accordance with scientific rules, but instead articulate, through the language of culture, the feelings and experiences which the masses could not express for themselves. The need to create a working-class culture relates to Gramsci’s call for a kind of education that could develop working-class intellectuals, whose task was not to introduce Marxist ideology from without the proletariat, but to renovate the existing intellectual activity of the masses and make it critical of the status quo.

In other words, the purpose of a Gramscian intellectual is to make more Gramscian intellectuals, who, as good proles, forever put feelz above realz.  Again, with what result, it’s hardly necessary to say.  But it explains academia’s fetish for the debased, vulgar, and deviant.  In the Fifties and Sixties, wannabe-intellectuals like Jack Kerouac sold other wannabe-intellectuals on the idea that the bad parts of prole culture are “authentic;” the worse, the better.  So “authenticity” isn’t just acting like a buffoon to make your daddy mad; it’s, like, critique of society, maaaan.  Fast forward 50 years, and academia is nothing but a celebration of deviance — “freaking out the squares” is, was, and always will be the whole point.  And now they have cultural hegemony.

What he got wrong:  Aside from the whole Communism thing, nothing.  Hegemony really works that way.  All modern “intellectuals” — that is, anyone who doesn’t use the word “intellectual” with a cynical snicker — simply IS a Gramscian organic intellectual.  Which is why we’re screwed.

Further reading: As I said, you don’t really need to read these guys, but reading about them sometimes helps.  Roger Kimball has two books on the university, Tenured Radicals and The Long March, that are quick fun reads.  If nothing else, you’ll know for sure what a scam “higher” “”””education”””” is.

*That they don’t follow this out and actually practice Christianity along with their socialism tells you that they understand neither Jesus nor Socialism, and also cognitive dissonance is bullshit, but whaddaya gonna do?  If they could do the whole “logic” thing, they wouldn’t be Leftists.