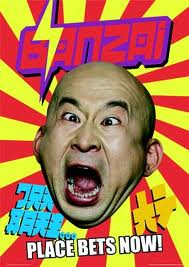 We must pass it to find out what’s in it!

Ban*zai Gam*bit.  noun.  Essentially the imperative form of moonwalking, the Banzai Gambit is a proposition in the form “X, therefore Y,” where X is empirical, Y is political, and X is unknowable by definition.

I remember one of my first political apostasies, back in high school.  We were studying World War II in the Pacific.  The teacher showed us a filmstrip that featured banzai charges and kamikazes.  My hand shot up.

“Weren’t they even trying to win?” I asked.

At the time, I was just glad to escape a trip to the principal’s office.  I wrote the whole incident off as yet another example of students being smarter than their teachers (not at all uncommon, in the hippy-dippy citadel where I endured grade school).  It was only years later when I finally realized what a bind I’d inadvertently stuck that poor lady in:

No, obviously, they weren’t trying to win.  At that point in the war, the objective was to lose with honor.  But according to liberal dogma, this is impossible.  All cultures are equally good.  No culture actively prefers death, especially when those deaths prolong an already unwinnable conflict.  And kamikazes certainly couldn’t have deliberately targeted hospital ships, since these were protected by international treaties…

Well, that’s PC for you.  Still, I couldn’t help feeling a pang of regret towards Ms. Jerkins (not her real name, obviously) while following yet another desperate attempt by leftist gadflies to create a Thread that Won’t Die, and this nice piece of sarcasm from Sonic Charmer.

In both cases, the liberal argument boils down to:  “We don’t know X; we can’t know X; therefore hugely intrusive Y.”

It’s an interesting tactic.  Appeals to ignorance have long been among the feeblest of logical fallacies. And there’s the obvious Underpants Gnome quality to it, basing an entire plan of action on something that’s by your own definition unknowable.  Like kamikaze attacks and banzai charges, these “arguments” seem deliberately counterproductive.  If you really want to win the war, you’d carefully husband every man and resource.  If you really want to convince someone to get behind your hugely expensive, socially transformative policy, you wouldn’t start with an admission of ignorance on one of the fundamental points.

And yet, the Banzai Gambit does work — witness ObamaCare, which we had to pass to find out what’s in it (warning: video auto-plays).  The Zachriel differ from other alwarmists only in their OCD level — we have no idea where the “green tech” to reduce emissions will come from, much less any clue how the “binding treaties” on pollution will be enforced, but both have to be committed to posthaste.  And now the minimum wage must be raised, even though, as Sonic notes,

I might think that when the government puts a price floor on labor that has an effect – in the only conceivable possible direction for that effect to point – but I’m not allowed to ever say or think so without untangling this effect perfectly from every last variable with a definitive, complete ‘study’. Which is something that would be impossible for humans to do, hence, the minimum wage is permanently fine.

In any rational society, people who made “arguments” like this would be immediately deported to third grade, and not allowed to play kickball at recess until they’d read Logic for Dummies cover to cover.*

Alas, we don’t live in a rational society.  Our liberals have decided — evidently correctly — that most voters will fail to notice the only constant in these proposals, which is that more and more power accrues to them and people who think like them.  Banzai!!!!