There’s a civil war on between radical feminists (so-called “Trans Exclusionary Radical Feminists,” or TERF) and the Trannies.

What, you hadn’t heard?

Well then hie yourself on over to The Other McCain and let him enlighten you.  (Seriously, the dude’s like a pit bull.  Once he’s got it in his jaws, he ain’t never letting go for nothing).

It’s easy to point at this stuff and laugh.  Fun, too.  But maybe, just maybe, this could be what Our Betters like to call a “teachable moment.”  Mr. McCain does something of that here.  Let me add my bit.

I have a lot of sympathy for Q folks (in the standard acronym LGTBQ, the Q stands for “Questioning”).  This isn’t some namby-pamby disclaimer.  Remember your own teenage years, where hormones dictate 99.98% of your behavior and it’s all sex, all the time?  Now imagine you see all your peers going one way, and you find yourself going the other.  How traumatic!  Leaving aside the question of whether gender dysphoria actually exists (personally, I think it does), the all-pervasive alienation of being attracted to the “wrong” sex, especially in the overcharged atmosphere of adolescence, is guaranteed to do some lasting psychic harm.  I wouldn’t wish that kind of pain on anyone.

That said:  The key thing here is difference.  Not to get all reductive or anything — the cardinal sin of the TERF, according to the Trannies — but both identities, and indeed every single micro-identity in the glorious rainbow coalition, rest on their possessors being inherently, irreconcilably different from everybody else.  Once they decide on, and embrace, a particular identity, the first thing these folks do is: Start excluding others from it.  That’s why the group names are calibrated down to the micron, and why every group’s self-proclaimed spokesbeing leads off its every pronouncement with a mile-long list of its preferences, like a medieval king reeling off the full list of his titles.

And yet, the one thing they claim to want above all others is inclusion. 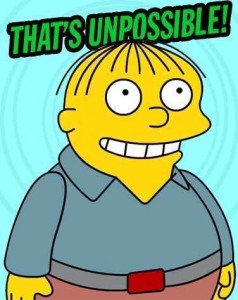 Instead of laughing at this — well, ok, in addition to laughing at this — let’s take the debate seriously.  The TERF — remember, that’s Trans Exclusionary Radical Feminists — hold the très conservative view that one’s original genitalia have some bearing on one’s gender identity.  They don’t want “trans women” to attend their radical feminist conferences on the grounds that all “trans women” once had, and many still do have, dicks.

That said, the radical feminists have a point, though not the point they seem to think they’re making (which, to be honest, I still haven’t quite figured out):  Things are for who they’re for.  But defining membership is different from defining identity.  Members of two different clubs can make common cause with each other in a third realm.  But defining identity by difference alone precludes that. If you define “horse” as “the thing which is left when you eliminate all things that are not horses,” then not only are zebras not horses, but zebras can never relate to horses, can never make common cause with horses, and, yes, can never go to the same radical feminist conferences as horses, because they have nothing in common with horses.  By definition.

That’s the lesson here, should any of Our Betters choose to take it.  The radical feminists realize full well that admitting trans women to their club is the end of their club, because trans women have embraced the definition-by-difference at the heart of identity politics more fully than the radical feminists have.  Radical feminists are hung up on defining women / feminists as “not men,” but the trannies have taken the proposition that “gender is just a social construction” one logical step further.  If “gender is just a social construction” is true, then when you eliminate all the socially constructed stuff, your gender is whatever you feel it is today.  You could be male today, female tomorrow, a radical feminist next week, a Westboro Baptist member next month.

This is the rot at the heart of all identity politics.  Perhaps it didn’t start out that way, but these days, every “identity” in “identity politics” is defined negatively:  “liberals” are “~conservatives,” “blacks” are “~whites,” “women” are “~men,” etc.  This is why liberals can say with a straight face that “Sarah Palin isn’t really a woman” and “Clarence Thomas isn’t really black.”  Palin is indisputably female and Thomas is indisputably dark, but it doesn’t matter, because they don’t display the suite of behaviors that define “woman” or “black”…. all of which are defined negatively against “white male.”

Take it on down the line.  This is why liberals react to specificity like vampires to garlic — they say they’re for gassy platitudes like “social justice,” but when you press them to define it, all they’ve got is more gassy platitudes.  There is a definition of “social justice,” of course, on which all liberals would agree:  “Social justice” is “the Koch Brothers ~wealthy.”  Our Betters are quite specific about which rights they’d like taken away from which groups, and the exact dollar amounts they’d like confiscated from the following individuals.  Or, as Morgan put it,

The rule seems to be that you can think whatever you want, but you’re not allowed to have influence unless you think the right things. If you don’t think the right things then you are to be driven out of whatever position you have. Once that’s done, you can go on thinking it, but the important goal is that we have to get our society properly arranged, with these good thoughts entirely saturating the tallest spires, and the bad thoughts entirely relegated down there in the dark alleyways, among the plebes. That is, from all I have seen and all I can figure out about it, the ultimate objective.

And whaddaya know?  Once badthink has been confined to the proles — who have no influence and never will — then we shall have Social Justice.

Of course, at that point, all the goodthinkful will fall viciously on each other like lesbians and trannies at a radical feminist conference, because definition-by-negatives requires it.  How can I be an X, if I’m not locked in a perpetual struggle against ~X?

One thought on “Dreaming the Unpossible Dream”