Even if the job itself isn’t worth the candle, the next generations are.

Which is most fundamental level of the problem, the kind that causes alkie-level cognitive dissonance: The next generations not only aren’t being served by the “education” system, K-thru-PhD, they’re actively being harmed by it. It’s negative value, and the insane cost of tuition is the least expensive thing about it.

I’ll try to confine my remarks to the university system, since that’s the one I know well, but the point applies across all levels. As we know, most problems stem from improper definition, so let’s get Confucian up in here. The school system we’ve created, K-thru-PhD, conflates what should be two distinct fields, education and training.

Education means “learning how to live.” The goal of an education is to produce the proverbial “well-rounded individual” — a citizen.

Training is the acquisition of job-specific skills, or their foundations. The goal of training is to give someone a livelihood, to produce a technician.

My own ex-career — “professor,” for lack of a better term, though “university instructor” is a much more accurate description of it in practice — is a good example of how these things get hopelessly muddled. As traditionally understood — meaning, in the system we copied wholesale from the Prussians circa 1850 —  a professor had three primary “job functions,” as the HR people used to say: teacher (technician), teacher (educator), and historian (technician).

I’m going to commit a historian’s sin here, and omit almost the entire backstory. The history of “education,” of the university system, whatever you want to call it, is long and complicated and fascinating, but not really germane. Like all human institutions, “educational” ones grew organically around what were originally very different foundations, the way coral reefs form around shipwrecks. Oversimplifying for clarity”: back in the day, “schools” were supposed to handle education (as defined above), while universities were for training (ditto). That being the case, very few who attended universities emerged with degrees — a man got what training he needed for his future career, and unless that future career was “senior churchman,” the full Bachelor of Arts route was pretty much pointless.

(At the risk of straying too far afield, let’s briefly note that “senior churchman” was a common, indeed almost traditional, career path for the spare sons of the aristocracy. Well into the 18th century, every titled parent’s goal was “an heir and a spare,” with the heir destined for the title and castle and the spare earmarked for the church… but not, of course, as some humble parish priest. It was pretty common for bishops or abbots, and sometimes even cardinals, to be ordained on the day they took over their bishoprics. See, for example, Cesare Borgia. Meanwhile the illiterate, superstitious, brutish parish priest was a figure of satire throughout the Middle Ages and Renaissance. A guy like Thomas Wolsey was hated, in no small part, precisely because he was a commoner who leveraged his formal education into a senior church gig, taking a bunch of plum positions away from the aristocracy’s spare sons in the process).

That being the case — that schools were for education, universities for training — the fascinating spectacle of some 18 year old fop fresh out of Eton being sent to govern the Punjab makes a lot more sense. His character, formed by his education (in our sense), was considered sufficient; he’d pick up such technical training as he needed on the job… or employ trained technicians to do it for him. So too, of course, with the army, and the more you know about the British Army before the 20th century, the more you’re amazed that they managed to win anything, much less an empire — the heir’s spare’s spare traditionally went into the army, buying his commission outright, which meant that quite senior commands could, and often did, go to snotnosed teenagers who didn’t know their left flank from their right.

Alas, governments back in the days were severely under-bureaucratized, meaning that the aristocracy lacked sufficient spares to fill all the technician roles the heirs required in a rapidly urbanizing, globalizing world… which meant that talented commoners had to be employed to fill the gaps. See e.g. Wolsey, above. The problem with that, though, is that you can’t have some dirty-arsed commoner, however skilled, wiping his nose on his sleeve while in the presence of His Lordship, so universities took on a socializing function. And so (again, grossly oversimplifying for clarity) the “bachelor of arts” was born, meaning “a technician with the social savvy to work closely with his betters.” A good example is Thomas Hobbes, whose official job title in the Earl of Devonshire’s household was “tutor,” but whose function was basically “intellectual technician” — he was a kind of man-of-all-work for anything white collar…

At that point, if there had been a “system” of any kind, what the system’s designers should’ve done is set up finishing schools. The “universities” of Oxford, Cambridge, etc. are made up of various “colleges” anyway, each with their own rules and traditions and house colors and all that Harry Potter shit. Their Lordships should’ve gotten together and endowed another college for the sole purpose of knocking manners into ambitious commoners on the make (Wolsey might actually have had something like this in mind with Cardinal College… alas).

But they didn’t, and so the professors at the traditional colleges were forced into a role for which they were not designed, and unqualified. That tends to happen a lot — have you noticed? It actually happened to them twice, once with the need for technicians-with-manners became apparent, and then again when the realization dawned — as it did by the 1700s, if not earlier — that some subjects, like chemistry, require not just technicians and technician-trainers, but researchers. Hard to blame the “system” for this, since pf course there is no “system,” but also because such a thing would be ruinously expensive.

Hence by the time an actual system came into being — in Prussia, around 1800 — the professors awkwardly inhabited the three roles we started with. The Professor of Chemistry, say, was supposed to conduct research while training technicians-with-manners. As with the pre-machine gun British army, the astounding thing is that they managed to pull it off at all, much less to such consistently high quality. They were real men back then…

As should be obvious, though, that system is fatally flawed when considered as a system, and it’s even more so in the case of a self-consciously anti-aristocratic society like America. Again, had anybody been planning this, what should’ve happened was the wholesale conversion of the Ivies into finishing schools on the Oxbridge model, since they were already set up with all that Harry Potter shit anyway.* The state schools, meanwhile, should’ve been what they were always intended to be — technician training centers — with the character formation stuff getting punted down to something like “high school plus.” Your standard grade school curriculum should’ve stopped with the Three R’s plus wood shop — that is, a modernized quadrivium — with an extra year or two optional for a modernized version of the trivium —  History, Literature, that kind of thing.**

Alas, what actually happened was the compression of all that into “college.” And here too, as with the British “system,” the remarkable thing is that it managed to work at all, much less to such a consistently high level. If you haven’t lately, go re-watch Animal House. A silly frat story, but ignore the jokes. Focus on the classroom scenes. Even Bluto is wearing a collared shirt, for pete’s sake, and the rest of the pledges wear neckties to class while reading Paradise Lost in freshman comp. 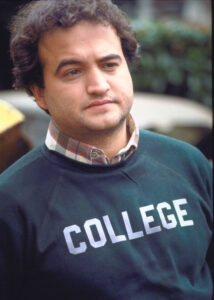 Professor Donald Sutherland (whatever his character’s name was) fails grievously in his socialization mission — introducing the kids to pot, sleeping with a student — but those scenes were recognizable to the film’s intended audience…. which, let us recall, was seeing it in the theaters in 1978. Hanging out socially with the professor was something people did back then, or were at least able to do, despite being random nobodies. Sutherland was bad at it, but his three-in-one role was not only expected, but actually carried out…

…and, sadly, still is. College as I have taught it — and I did it for many, many years — is pretty much nothing but socialization. Not in the sense that you get a bunch of students together and hang out with them — most profs I know, being the kind of socially awkward autistic dorks that make “gamers” seem well-adjusted ladies’ men, would commit suicide first — but in the sense that all the “schoolwork” consists of nothing but recitations of the catechism. You don’t go to college even to learn a skill, much less anything so gassy as “critical thinking.” All you learn is the catechism, how to fill out Social Justice Mad Libs. This isn’t a side-effect of a “college” “education;” it’s the entire point.

A first step to meaningful education reform, then, would be to figure out what education actually IS. Most people don’t need it, or much of it. All they need is technical training… and the attempt to shoehorn the one into the other means that nobody gets either.

*You can tell a real Ivy grad by their auto-signature. It’s not enough to list your graduation year the way pompous parvenus from “selective private liberal arts colleges” do — “Martha Cumdumpster (’09) wishes to announce xyhr commitment ceremony with xzhryr partner, Sally McArmpithair (’07).” Real Yalies, at least, etc. list their “college” (“Silliman ’09”) and Harvardians their club affiliations.

**I am of course aware that this is the reverse of the Medieval course of study, but the Dark Ages can suck it. We’re headed back there at light speed in any case.