Further to the 90s music discussion…

Something felt off when I arrived at Flyover State* to take up my first teaching gig. It took me a while, but I finally figured it out: Everything, everywhere, was just ugly.

“Blandly utilitarian” was about the best that one could say about the least offensive campus architecture; “brutalist monstrosities” was closer to the truth for most of it. And as with the campus, so with the town — the off-campus housing was beautiful old Victorian houses ripped up and made into “efficiency” apartments, crammed cheek by jowl with poured-concrete boxes that looked like barracks for low-ranking Party members in the Pyongyang suburbs. The public parks were nicely landscaped, but each featured some publicly-subsidized “art” that made you want to gouge your eyeballs out. Every single space had wheelchair ramps, and was festooned with enough signs to give M. Night Shyamalan wood. It was hideous.

As with the built environment, so with human behavior. Everyone on the faculty looked like a refugee from 1968, but instead of toking righteous bud, they’d been taking sriracha enemas. The shopkeepers who catered to them were seemingly locked in a contest to out-obnoxious each other over their leftwing politics, and as for the few tradesmen who provided vital services, they had the warm and welcoming vibe of a DMV supervisor. Not that I blame them for this — I ended up hanging out with a lot of those guys at a townie bar, and trust me, being called out to work at a professor’s home is exactly the kind of experience you think it is. Hurry up and fix the leaky pipe, bigot, while I lecture you about your privilege… then try to stiff you on the bill. (Same thing in reverse for the students). So they came off like cops, assuming that everyone they met was a dyed-in-the-wool asshole until proven otherwise.

Life in a college town, then, is soulless, instrumentalist, transactionalist — everything’s for sale, but everything had best be spelled out, in writing, in triplicate. Nobody’s from there, nobody stays there, so everything is always on the arm. No one and nothing is ever on the level; everyone is always looking to chisel everyone else. And, ironically, the longer someone stays there, the more likely xzhey are to push this attitude to near-platonic perfection — eggheads all believe, with all their hearts and souls, that they deserve to be at Harvard, so when Harvard doesn’t come calling, the days and months and years become an intolerable insult. How dare they expect me to live like this, in a place designed to cater to my every whim, making only 100 large per year! It’s an outrage!!

Looking back on it, I see now why I hated the 1990s so much. Eggheads are incredibly conservative about everything but their politics, but in this one case, they really were a “progressive” as they fancy themselves. Before just about anyone else, they embraced the globohomo ethos of rootless piracy. Then as now, they all claimed to hate “sportsball” (if you’ll forgive an anachronism for clarity’s sake) with the heat of a thousand suns, but they could’ve given LeBron James lessons on how to be a backstabbing, glory-hogging, money-chasing, utterly mercenary douchebag. As early as the late 1980s, they found the idea of remaining loyally in one institution, building it up as a service to the community, as laughable as modern sportsballers find sticking in one city in order to be a role model. Fuck that, give me mine!!!

I found grunge rockers and their endless quest for “authenticity” to be insufferably pretentious even back when I myself was insufferably, pretentiously concerned with “authenticity,” but in retrospect I have to hand it to them — they had a point. They saw it before the rest of us.

Nowadays, everyplace is like Flyover State. Everything’s ugly, everywhere. Your city might decide to create a park, but if they do, it’s 100:1 that it’ll be uglier than sin, and that’s before you get to the safety signs everywhere; the brutal, designed-by-committee “art;” the million and one things that will get tacked onto it to display the city council’s preening SJW virtue. It’s 10:1 the damn thing never gets built — all they really wanted to do is hold a vote on constructing the “Rosa Parks Memorial Arboretum and Social Welfare Center, Phase II” (and, of course, featherbed a bit by cutting a few under-the-table deals with real estate speculators). If it ever does get built, the spaces that aren’t “murals” “painted” by disabled lesbian Eskimo pygmies Of Color will be slathered in ads for bail bondsmen and used cars, because nothing says “the city beautiful” like pasting half the yellow pages on every public space…

We are a soulless, mercenary people. Our lives are ugly because of it. At least Judas got 30 pieces of silver for his betrayal of the Good and True; all we got was a shitty “sculpture” that looks like a helicopter crash and an IOU

EDIT since a picture is worth a thousand words, behold the apex of intentional ugliness: 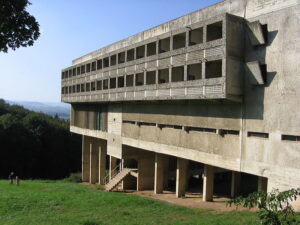 That’s the priory of Sainte Marie de La Tourette, designed by Le Corbusier in 1953 and completed in 1961. That’s supposed to be a monastery. A real one, a working one. Wiki says:

The committee that decided the creation of the building considered that the primary duty of the monastery should be the spiritual awakening of the people and in particular the inhabitants of nearby areas.

Is there anything less likely to produce spiritual awakening than that horror? The only god that would feel comfortable in Sainte Marie de La Tourette is fucking Cthulhu. Search google images for “Le Corbusier churches” for more, if you have a very strong stomach.

Deliberate. soul-killing ugliness, in places that are supposed to be uplifting to the human spirit. You want to know why Leftists are such thoroughly nasty, awful people? It’s because they’ve got this inside, where their souls should be: 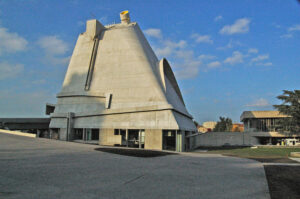 *”Flyover State” is, of course, an amalgam of several different institutions. They’re all big-ish, and all in flyover country, and range from “a large junior college” to “a nationally-ranked (God alone knows how) public research-I university.” When I’m hauled up in front of the Thought Police, I’m going to do like some Soviet generals did during the show trials — I’m going to list all the institutions that employed me, a notorious badthinker, and I’m going to accuse all the department heads etc. who signed off on my hiring. From hell’s heart I stab at thee; for hate’s sake I spit my last breath at thee, you egghead fucks.

12 thoughts on “Everything Is Ugly Now [edited]”