A while back y’all said you wanted to see some more “behind the ivory curtain”-type posts. Since we aims to please, I’ve created a whole new category of posts, “Academic Life” (it’s like thug life, but made entirely of soy). Here’s the first entry:

Over at the other site*, we’re discussing the oft-observed fact that pretty much everyone in Leftoid politics is some kind of fuggernaut. This is, as the Marxists say, no accident — since Marxism is just nihilism masquerading as economics, those who feel wronged by ambient civilization are drawn to it. But as I noted over there, fug “politics” never seems to take the next logical step — grab ’em by their self-identified genitalia. Power is the ultimate aphrodisiac, as Henry Kissinger supposedly said, and if power could get that guy laid, then the fugs — who control everything in a college town — should be able to get some action pretty much any time they want it…

But they never do, and thereby hangs a tale (or is that “some tail?”).

I know, I know. But have I ever lied to you? This really happened, y’all.

It gets better. That evening, the grad class above us invited all us newbies out for happy hour. Chloe showed up, of course. She made a point of going around to every guy in the bar — and again, I swear this really happened — and dropping it on them: “Damn, I really need a drink, because last night my vibrator broke before I could get off.” Fortunately I noticed this early on, so I had time to prepare. I hadn’t read Heartiste yet at that point, but I’m proud to say that I came up with a variant of a line he himself authored. When she said it to me, I replied with “I can see why you graduated with a 4.0 from charm school.”

Not the smoothest, I’ll admit, but it got the job done, especially as it was my exit line. Being men (ok, persyns) of the world as y’all are, I’m sure you know what happened next: Chloe followed me around the bar all night, and her behavior over the next few weeks bordered on stalker-ish. She quickly got over it — Leftists are irritated butterflies, they have short attention spans, and besides, I’m obviously not a player, I was authentically repulsed — but I never forgot it, not least because grad school is a microscopic world; Chloe and I were together a LOT over the next few years.

And in all those years, I never knew Chloe once to actually get laid.

Apologies for being crude, especially as the lady isn’t here to defend her reputation, but since she’s a great illustration of the type I’ll continue. Chloe was, of course, a feminist, so the ideology behind her behavior was the tediously familiar one – she was “asserting control over her sexuality.” But here’s the kicker: Chloe wasn’t bad looking. Do y’all remember the girl who got show-trialed up in Canada for playing a Jordan Petersen clip in her class? 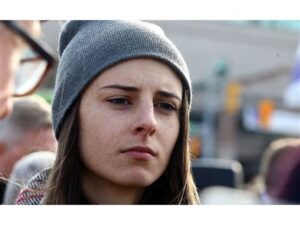 That’s a grad school 10, y’all, and while Chloe wasn’t quite in that league, I think we can all agree that Lindsey Shepherd is at least kinda cute; she certainly wouldn’t have trouble scoring at most bars frequented by normal humans.

Thus Chloe, out of everyone in our class, was well-positioned to experience the truth of sexual relations outside the ivory tower. For normal women, getting laid is a two-step process:

For 75-90% of women under 40, step 2 is optional. It would’ve been for Chloe. Especially in a bar full of grad students, who despite their extensive academic training on “the rhetorics of hegemony” and whatnot, still aren’t quite sure how the naughty bits fit together. She might’ve had to draw the guy a map, but surely that’s no problem for someone so assertively in control of her own sexuality as was Chloe…

And that’s just normal people, who know what pronouns to use and never hesitate when choosing a public restroom. The real freakazoids actually have it much easier, since loudly proclaiming a deviant sexuality is a status symbol in the ivory tower. Perhaps your deepest, most secret fetish involves cocktail onions and a Shop-Vac…. and let me stop you right there, I do NOT wanna know, I’m only bringing this up to say that hey, I sympathize, love is real and you’re having a hard time finding yours.

You should consider academia, my friend, where not only are such things not shameful, but they’re positively celebrated. If you’ve actually got video of yourself doing the nasty under those conditions, they’ll pretty much hand you a PhD in Performance Art on the spot…

…and yet, nobody does.

I’m not saying people don’t have sex in grad school. If I myself wasn’t getting my ashes hauled every day in the ivory tower, I assure you it wasn’t for lack of trying. What I am saying is that academia is the only place on earth where not only is your fetish — whatever it is — not shameful, but easily satisfied. Those of us who actually enjoy the missionary position with committed partners of the opposite-sex used to joke that ours was the only sexual deviancy so perverse, you’d be shunned by all your colleagues if you admitted to it. These people, on the other hand, talk like their gonads rule their lives, but they never actually do anything about it.

I have no idea why, but finding out would tell us a lot about the psychology of the average Leftist.

*foundingquestions.wordpress.com. As noted over there, we’re trying to keep the links to a minimum, since the censors are both lazy and stupid and so long as there’s no direct link to things they won’t bother “contact tracing” us.