Never attribute to malice what is adequately explained by stupidity.

Some stupidity is so stupid, you actually hope it’s malice.

The psychology of this fascinates me, and not just because some handsome, well-endowed bloke named it after me.  Take this, for instance.  As McCain points out, everyone who cares to know — and many, many, many people who don’t — know that Eric Ciaramella is the so-called “whistleblower.”  Likewise, anyone with more than three brain cells to rub together knows that Ciaramella is your standard-issue hyperpartisan Democrat operative.  Here he is, for example, hanging out with Joe Biden’s people and a bunch of Ukrainians at an NSC meeting back in 2015 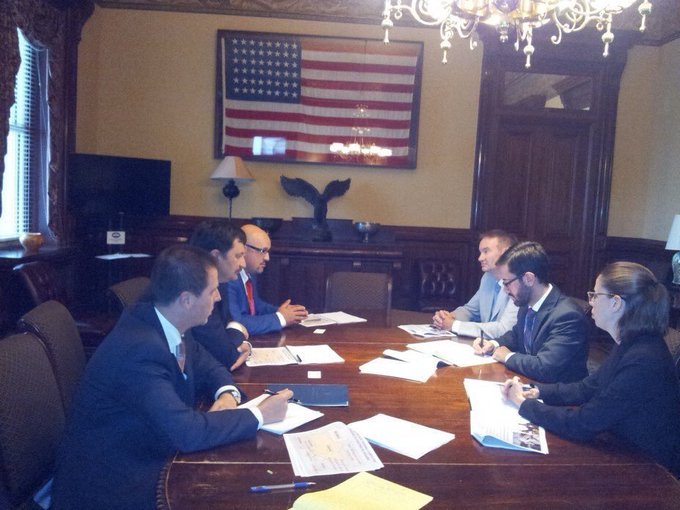 Pretending that this guy’s name is super-secret spy information is so dumb, it makes anti-sense, what with the Streisand Effect and all.  And yet, all the Media people still carry on like Trump’s campaign guy just Tweeted out the nuclear launch codes or something.  And that carrying-on, in turn, seems positively genius compared to building a “case” around an obvious partisan’s hearsay, especially after the Streisand Effect has really kicked in and anyone not living under a rock has learned that he couldn’t possibly know what he claims to know….

… and yet, here we are.  I might have to retire the Severian Corollary, since malice and stupidity have overloaded the dilithium crystals and we’re about to be sucked into a supermassive black hole of absurdity.  In an effort to salvage it, though, let me suggest: College.

How can people be so dumb as to believe this?  Not “act as if” they believe this, since no one is that good an actor.  For every Nancy Pelosi who knows full well it’s an op, there are five Adam Schiffs, Jake Tappers, etc. who, even though they’ve undoubtedly been briefed on the op, still somehow believe it’s real.  I know, I know, it makes my brain hurt, too…. but there’s precedent.  Passionately believing the truth of something you know to be false is the hallmark of campus culture.

It’s pretty simple, actually.  As one only gets tenure by publishing, and since only original “research” gets published, the Humanities would cease to exist if their professors confined themselves to things like “evidence” and “reason.”  Shakespeare, after all, isn’t around to write any more sonnets, and we’ve long ago examined all probable causes of big historical events like the Civil War.  The only thing to do, then, is entirely decouple the Humanities from reason and evidence.  This is Postmodernism, and it’s so successful because it starts with an impossibility — it’s a fact, the PoMos declare, that there’s no such thing as a fact.

See what I mean?  People like Stanley Fish, Richard Rorty, Fredric Jameson et al aren’t stupid; they know full well they’re embracing a contradiction.  But they are people.  Specifically, they’re people with very cushy one-percenter lifestyles that they’d have to give up if they acknowledged the glaring contradiction, so they …. don’t.  It seems incredible, typed out nakedly that way, but everybody does it all the time.  Atheists think believers do it, of course, and believers feel the same way about atheists.  We’re all sure that deep down, sports fans know they’re just rooting for laundry.  Every pet owner has dropped some food on the floor and caught a glimpse of how thoughtlessly your beloved Fido would eat you if you happened to keel over dead.  On the great list of glaring contradictions people live as if they believe, “the fact that there’s no such thing as a fact” might not even crack the top ten.

If the professors believe it, of course, then so must the students.  Whether the average college kid actually in his heart of heart believes this stuff can, of course, never be known… but they all sure as hell act as if they do, and it’s functionally the same thing.  The one ray of hope is that the average college kid, like the average human, is pretty dumb.  Most likely he just scribbles down “no such thing as a fact” in his blue book at midterm time and promptly forgets the whole thing….

… but I trust y’all see where this is going.  One doesn’t make it into the ranks of the elite Blue Checkmark Twitter Commandos by scraping by with a two-point-something GPA.  You’ve got to really sell it if you want an A in Homi Bhabha‘s class.  So they do.  Nobody even attempts Postmodernism without being naturally verbally dexterous, and when you throw in the sacerdotal lingo that “will construct your sentences for you — even think your thoughts for you, to a certain extent — and at need …partially [conceal] your meaning even from yourself,” well, it’s not hard to see how they start believing that bullshit they themselves helped invent is actually the truth.