It’s not an idle question. Back in the Cold War, prudent Kremlinologists had to take the marked decline in the Politburo’s collective intelligence very seriously indeed (the old adage “never attribute to malice what is adequately explained by stupidity” is terrifying when the potentially malicious dumbasses have nuclear missiles).

There were two main reasons for the decline, both structural. The first, of course, is Communism itself. A totally ideologized society is a society totally committed to make-believe. You could fill a good-sized book listing the catastrophes make-believe caused the USSR. Just to take the most obvious: Hitler did everything but send the Goodyear Blimp over Moscow, towing a banner announcing his invasion plans. But since everyone who accurately reported the goings-on in Poland ended up in the Gulag, the Wehrmacht walked right on in.

The second has to do with the nature of totalitarian leadership. Obviously sharing power is out of the question, so every Boss who finally claws his way to the top ruthlessly purges everyone who could conceivably challenge him. The purged are replaced by yes-men and toadies, who immediately enact mini-purges of their own inside their new departments. It doesn’t take more than a few rounds of this for smarter functionaries to learn to dig themselves in very, very deep, disguising themselves in a kind of protective stupidity. A few more rounds, and “protective stupidity” drops the modifier, as anyone with anything on the ball has decamped for the safer — and, not coincidentally, very soon much more profitable — havens of technical management.

It doesn’t take long before your “leadership” is nothing but ideology-addled dimbulbs. Sound familiar?

American politics isn’t that kind of contact sport yet — soon, my Antifa pretties, soon — but one of “capitalism’s” great ironies is that it creates several different breeding grounds for the ideology-addled idiot parasites that eventually destroy it. Politics is the most obvious example, but there are lots of others. The “education” business, for instance, is little more than make-work for idiots. You’ll never get rich as a teacher, of course, but a nice middle-class salary, great bennies, a nuclear-armed union, guaranteed lifetime employment, and fucking summers off is a very sweet gig indeed. The red tape and routines and meetings, endless meetings, are infuriating to anyone with more than two brain cells to rub together, but for a certain type of person — the kind of dull, vapid, lazily malicious person who would volunteer to be a Block Warden in the USSR — it’s heaven.

Indeed, it’s not going too far to say that these types of institutions are designed to chase off anyone brighter, more honest, or more hardworking than the average member. If you haven’t had any experience with teachers or school boards lately (you lucky bastards), think back to your last encounter with Human Resources, or your neighborhood’s Homeowners’ Association. The only person who can stand to work for HR or be part of the HOA is…. well, is the kind of person who works in HR or is part of the HOA — dull, vapid, lazily malicious busybodies. They’re as lazy as they are dumb, as dumb as they are malicious. The key to dealing with them, like the Sovietologist’s key to predicting the Politburo, is figuring out which of their lovely personality traits is likely to come to the fore in a given situation.

And so, the Democrats. They’re fanatical, stupid, and arrogant, in about equal proportions. How are they going to break?

A sane person would do that. But the question is, what would a Democrat do?

It’s quite possible they’re dumb enough to put Grandpa Sneakyfingers, as the wonderful Ace of Spades slur has it, on the stage. No, really: Even being as generous as possible, even ruthlessly excluding, insofar as humanly possible, my own biases, there are way too many examples for me to conclude anything other than: There are lots of profoundly stupid people in high places in the Democratic Party. Over and above what you’d expect in an apparat-type organization, I mean, and — see above — that’s pretty much everybody.

“Actual training for their new areas of responsibility” is for rubes and poor people. All Liberals are Universal Geniuses, of course, Experts Without Portfolio who instantly and effortlessly master any discipline they choose — see e.g. all the new-minted constitutional law scholars of February, who took less than 24 hours to become PhD-level epidemiologists in March, and who are now experts on urban policing. But the kind of Liberals who work on political campaigns are super-extra-mega Universal Geniuses — just ask ’em!!  Since the Media insists that ol’ Creepy Joe is fine, just fine — never better!! — and since Twitter is the only thing that’s real, ol’ Creepy Joe really is fine. Everyone they know thinks so, and everyone they know is the smartest person in the world (except for them), so….

Thanks to the apparatchik effect, ignorance slides effortlessly into arrogance, and back again. But then there’s just plain ol’ straight-up hubris to consider. Here again, giving them the benefit of all possible doubt, and putting aside, as far as humanly possible, my own biases, I have no choice but to conclude: Lots of Liberals are just fucking with us right now. Fauci and Birx want us to wear fucking goggles when we leave the house, for fuck’s sake. They take obvious, malicious joy in violating their own stupid rules in full public view. 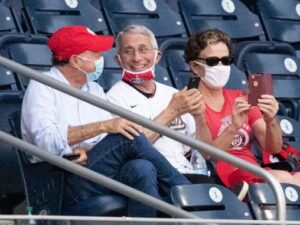 They ban this, cancel that, mandate the other thing, all on a whim — they’re just daring us to punch back. I wouldn’t put it past them, at all, to stick doddering ol’ Sundown Joe up on stage, to slobber and meander and drift off to sleep at the podium, just because they can. Because fuck you, that’s why. It’s no more of an insult, really, then running the senile old bastard in the first place.

Take it out as far as you want. That they’re going to try to steal the election goes without saying, even without the mail-in ballot idiocy. It’s easy enough to do — see every election in Chicago, say, 1833-present. Your normal, sane, reasonable electoral criminal would only falsify enough ballots to tip a close election their way. But again, see every election in Chicago, 1833-present. They have dead people, pets, and dead people’s dead pets voting, every single year. Every single year, districts go 100% for one candidate, often with more votes than there are registered voters. Whether you want to call it stupidity, arrogance, or whatever combination of the two, I would not be at all surprised to see them going for a 50-state sweep. Frogs and scorpions, baby — they can do no other.

The reason this matters is: Forewarned is forearmed. Like Cold War Kremlinologists, our very survival’s at stake in figuring out what they’re likely to do. Pay attention. (Plus, it’ll be fun).

24 thoughts on “How Dumb Are Liberals?”