Alinsky #4 is “Ridicule is man’s most potent weapon.”

Well, I’m going to ridicule the ridicule.  Ran across this meme today … 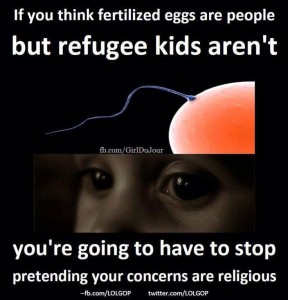 The obvious question being begged here is … exactly who is saying that these kids aren’t people?  I’m pretty sure exactly nobody.  It’s a giant strawman.

And believing that a fertilized egg is a human being isn’t necessarily religious, though when arguing the “separation” angle our leftist friends insist that it is that and only that and therefore must it be excluded from public  debate.   But there are even atheists who believe it philosophically.  A compelling argument can (and often is) easily made that it is a human being without bringing God or Gaia into it.  So again … that’s a stupid “argument” for LOLGOP to make.  The other insult here is that they are suggesting that people only “pretend” to believe it — insinuating that they really have ulterior motives (likely along the lines of “oppressing” Sandra Fluke).

If you would post this meme, you’re going to have to stop pretending you have a shred of intellectual honesty. 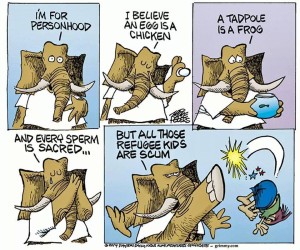