“Jesus: The Original Liberal” said the bumper sticker. “Jesus was a liberal!” screamed another. Liberals love to claim Jesus Christ of Nazareth thinks the way they do, when the opposite is true. (They even have their own website claiming it, apparently…)

Modern Western Civilization is largely divided between two competing and diametrically opposed worldviews: the Secular Progressive (the SP’s) and the Judeo-Christian (the JC’s). With some exceptions, most modern liberals conform to the former; modern conservatives to the latter. There are many significant differences in philosophy between the two, but here are some of the most important: 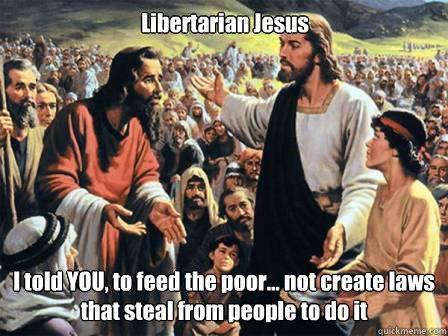 Let’s try to remember – history’s most murderous regimes were officially atheist: the USSR, Maoist China, Nazi Germany, the Khmer Rouge’s Cambodia, etc. Such regimes saw no moral problem with slaughtering those who did not conform to their vision of utopia. And slaughter they did – by the millions. None of them espoused views that were in any way compatible with conservatism. They were socialist – in other words, leftist. Like modern leftists, they adopted gun control and dozens of other policies today’s liberals support. And yet the modern Left wishes to claim Christ as its forebear?

What is very ironic is that most of those who sling the “Jesus is a liberal” slogan probably don’t even believe in God, much less in the divinity of Jesus Christ of Nazareth. Rather, this statement is used as a club to attempt to shame Christian conservatives into silence, especially on the social issues of our time. The thinking goes that liberals are closer to the example Jesus set, simply because they favor more income redistribution (“welfare”) by the government. Their specious logic tells them that they are more compassionate than are conservatives, simply because the latter believe that charity for the downtrodden should:

Liberals foolishly believe themselves to be more like Jesus, because they just love love love everyone as Jesus did – conveniently forgetting that Christ also demanded personal responsibility and moral accountability, as conservatives do today. As an example, let’s look at liberals’ favorite Biblical quote:

8 1 but Jesus went to the Mount of Olives.

2 At dawn he appeared again in the temple courts, where all the people gathered around him, and he sat down to teach them. 3 The teachers of the law and the Pharisees brought in a woman caught in adultery. They made her stand before the group 4 and said to Jesus, “Teacher, this woman was caught in the act of adultery. 5 In the Law Moses commanded us to stone such women. Now what do you say?” 6 They were using this question as a trap, in order to have a basis for accusing him.

But Jesus bent down and started to write on the ground with his finger. 7 When they kept on questioning him, he straightened up and said to them, “Let any one of you who is without sin be the first to throw a stone at her.” 8 Again he stooped down and wrote on the ground.

9 At this, those who heard began to go away one at a time, the older ones first, until only Jesus was left, with the woman still standing there. 10 Jesus straightened up and asked her, “Woman, where are they? Has no one condemned you?”

“Then neither do I condemn you,” Jesus declared. “Go now and leave your life of sin.”

See? Jesus loves, yes, but He also requires a certain standard of behavior. It’s got nothing to do with this “Be whomever you want to be – God loves you!” stuff we hear from liberals today.

Later in the New Testament (2 Thessalonians 3:6-12), the Apostle Paul builds on this by requiring a work ethic, something else favored by more conservatives than liberals. Liberals use federal public assistance to subsidize sloth and shiftlessness. Any conservative who suggests we ought to take another look at that is called heartless…and his Christian credentials are questioned, if he claims to be one.

The problem is that the teachings of Christ (and the Apostles) are not at all consistent with modern liberal prescriptions.

Here’s the core issue: Liberals think Jesus would have favored government’s forcible income redistribution programs, when He really meant private voluntary charity. When Jesus exhorted His followers to help the poor, He did not say, “Advocate for government to confiscate the possessions of others and give that money to the underprivileged.” Rather, He said, “If you want to be perfect, go, sell your possessions and give to the poor, and you will have treasure in heaven. Then come, follow Me.” (Matthew 19:21, emphasis added) Do you see any impetus for that among modern liberals, or is it conservatives you find giving of their time and money?

Liberals do not understand this simple distinction – that voluntary charity is a completely different ball of wax from the government’s involuntary welfare state. Charity or compassion, funded by taxes taken forcibly from an income earner, has no soul. It bears no resemblance whatsoever to the sort of giving which Jesus preached to His disciples. Read it for yourself:

8 But Zacchaeus stood up and said to the Lord, “Look, Lord! Here and now I give half of my possessions to the poor, and if I have cheated anybody out of anything, I will pay back four times the amount.”

9 Jesus said to him, “Today salvation has come to this house, because this man, too, is a son of Abraham. 10 For the Son of Man came to seek and to save the lost.”

If a taxpayer wished to voluntarily help the poor and downtrodden, that person should be able to contribute his excess wealth to private charitable organizations set up for this purpose, instead of acting through the government. This is better in two ways: first, private organizations tend to be more efficient at servicing the needy than are government entities, which means that more of the dollars given will reach the intended destination. Second, and more importantly, this provides the taxpayer with a means of helping the poor, without forcibly imposing the same burden on other taxpayers who would not have voluntarily made the same financial choices. Honestly – would you prefer that the IRS just help itself to your paycheck and use the proceeds to fund food stamp programs, or would you rather write a check directly to the Salvation Army when you want to, and for the amount you can afford?

But what of the notion that Jesus might have been liberal in other ways? This view is also not correct. Let us first define our terms: ‘Liberal,’ according to Merriam-Webster Online Dictionary, means “not bound by authoritarianism, orthodoxy, or traditional forms.” ‘Conservative,’ by contrast, is defined as “tending or disposed to maintain existing views, conditions, or institutions.”

We can safely interpret this to mean that liberals generally are the ones who bring about political and social change, whereas conservatives tend to oppose such changes to existing rules and norms. In common use of the terms, however, liberals generally favor more wealth redistribution programs, while conservatives favor less – that is, limiting public assistance to the *truly* needy. (We now have one out of every seven Americans on food stamps, with about half of all households receiving federal transfer payments of some kind. The Left insists that it’s still not enough.)

The fact of the matter is that Jesus, contrary to popular belief, was not liberal but rather, conservative. It is those who opposed Him, such as the Pharisees, who were the liberals of first-century Judea.

Why is this the case? For one, Jesus said as much Himself: “Do not think that I have come to abolish the Law or the Prophets; I have not come to abolish them but to fulfill them.” (Matthew 5:17) A common misconception about Jesus is that He represented some kind of massive sea change in social norms or in the way man relates to God. In fact, nothing could be further from the truth. Far from being an agent of reinvention, Christ was the missing puzzle piece of an existing picture. He was the key which unlocked the secret of man’s relationship to God, and with it, the gates of Heaven. He completed the Jewish faith by fulfilling the fortellings of its prophets (by appearing exactly when, where, and how, all predicted millennia earlier), and by providing the final and perfect sacrifice which could remedy man’s sinful nature for all time. A rift had existed between man and God ever since that unfortunate incident in the Garden of Eden (Genesis 3:1-24); Christ, however, died on a wooden cross and then rose again on the third day, which rectified the situation for all who would accept the gift. (Romans 5:12-19) The old ways of temple priests and animal sacrifices, valid at one time, were now no longer necessary.

By contrast, the Pharisees and teachers of the law of Jesus’ time were the liberals. They were the ones who had brought about change in God’s people by perverting the Law which God gave to Moses, while still remaining in a position of leadership as Jewish religious authorities. The Pharisees had become corrupt and powerful over the years, adding oral traditions to the Law, which God had not authorized, and honoring the letter of the Law while ignoring its spirit. Jesus referred to them as “snakes and sons of snakes,” then further called them on their hypocrisy by stating that they “…clean the outside of the cup and dish, but on the inside, are full of greed and self-indulgence.” (Matthew 23:25-28, Matthew 21:12-13.) The Pharisees clearly were the liberal ones, having heard the Word of God and turned away from it long before.

Jesus came to Earth to, among other reasons, explain to God’s people where mankind had gotten off-track, (John 4:1-26) and much of the rest of the New Testament elaborates on this point. Throughout His teachings, Christ tells us that it is pointless to hew to the letter of God’s laws, but in the process lack love and voluntary compassion toward one’s fellow man. Jesus came to remind humanity of the truth that God did not hand down the Mosaic Law (Exodus 34:1-8) simply for His people to turn right around and treat their brethren with arrogance and disrespect as the Pharisees were doing. It was the Jewish leaders of the day who were the liberals; they were the ones who had changed the Jewish faith into something it was never intended to be. (Matthew 12:1-12)

Besides, what part of the modern liberal agenda is in harmony with Christ’s teachings? Abortion? Euthanasia and assisted suicide? Darwinism: the idea that man is not God’s special and unique creation, but rather just a glorified ape arising from a primordial soup of muck through random chance? Affirmative action in employment and education based on race and gender, rather than character and merit? The rejection of traditional marriage as a social institution? Central economic planning? Moral relativism: the rejection of an objective moral code that applies at all times to all people in all places?

Which of these liberal notions is consistent in any way with Christ’s teachings or with any other part of the Bible? On the contrary, all of Scripture, including the message of Christ, would appear to side with conservatives in opposing each of these liberal crusades.

An honest and objective review of the Old and New Testaments forces a person to one inescapable conclusion. Namely, that Jesus Christ of Nazareth is not liberal, but in fact, conservative.

73 thoughts on “Is Jesus Liberal or Conservative?”