Like all right-minded people, Ace of Spades is unhappy with the Eight Amigos and their shamnesty plan.  It’s a good post; read the whole thing.  But especially consider this:

Another thing to consider is that as a moral, political, and psychological matter, it is far better to have a country in which most of its voting citizens have the self-worth and natural connection to the economy that a job provides, as opposed to having more and more citizens taking the government dole, knowing they are essentially worthless to the nation, so many useless mouths to feed.

That breeds cynicism, lack of responsibility, and lawlessness, and we see it in every community in which taking the dole because almost as common as (or actually more common than) working for wages.

Actually, what it breeds is fascism.

The historical precedents should be obvious enough.  “[K]nowing they are essentially worthless to the nation, so many useless mouths to feed” is a spot-on description of more than a third of German workers in the Weimar years.  It was especially characteristic of young men back from the front, who felt they had wasted the best and most productive part of their lives in the service of a government and a society that betrayed them.  They boys who left as heroes in 1914 found themselves, in 1919, as scapegoats, the embodiment of a failed and destructive ideology that of course all thinking people rejected.

Sound familiar?  As our readers (all three of them) are conservatives, and therefore have basic historical literacy, I’ll assume you get it by now.  But since this is the internet, I’ll spell it out:  If you live fat and happy on the sweat and sacrifice of the most dynamic sector of your population — if you send them off to do a job with high praise, telling them it’s their sacred duty — and then, when the job proves impossible, you call them fools and suckers for having listened to you, they getangry.

When you then tell them there’s no work thanks to the obvious-in-retrospect mistakes you yourselves so gleefully made — and you yourself do not suffer in any way from this, but grow ever fatter and happier — they get furious.

We’re very nearly to that point now.  Consider a young white male — still by far the largest percentage of the workforce* — considering his options this fall.  Should he look for a blue collar job?  What’s the point?  Our Betters in government and the media have all but said he’s surplus to requirements.  Should he go to college?  For what?  Unless he’s got the chops to be an engineer, he’s invested four years, fifty grand in debt, and all he’s learned is that he’s the source of everything that’s wrong with America.  Now go get a job, sucker.  The entitlement state ain’t gonna fund itself.

Speaking of, you know what else got people listening to the Nazis?  Their pledge to break the Treaty of Versailles.  You know, the peace accord from World War I that saddled Germany with billions of dollars in reparations payments even as their productive base was either destroyed or occupied by the Allies.  Even the emergency debt restructurings agreed to, however reluctantly, by the Allies in the depths of the Depression ironically aided Hitler — if a slight easing of debt resulted in small gains in the quality of life, what would total repudiation do?

It’s obvious to anyone not suffering from cranial rectosis that the net tax receipts from twenty million newly legalized unskilled workers won’t come anywhere near their net drain on the entitlement state.  You know, the $16 trillion behemoth that’s going to bankrupt the country in the next ten years.  The one that has already downgraded our credit rating and makes our government securities unsalable at any price.  The one that will push debt service up to 100% of GDP in a few decades without adding 20 million new citizens at the stroke of a pen.  And that says nothing of Obamacare.  Add a few trillion more. 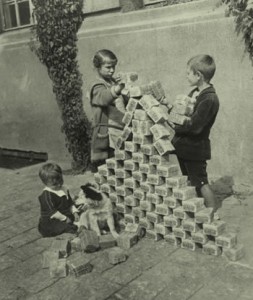 Our kids, too, will soon learn the joys of building a little fort out of stacks of our worthless currency.  Good times.

So, to recap: We’ve spent the last few decades telling the largest sector of our workforce they’re either inherently evil or worthless.  When times were good we could shrug it off — who cares what some Professoress of Wymyn’s Studys thinks when the Dow’s brushing 12000 and we can all get some kind of spreadsheet job?  We could chalk up the structurally redundant to hard luck.  But what happens when an entire huge segment of the population of a representative government feels, not just un-represented, but actively fucked over by that government?

That’s a rhetorical question, by the way.  Because the last nail in Weimar’s coffin was the widespread distrust of democratic institutions.  Many ordinary — that is to say, unemployed, cynical, bitter, despondent– Germans felt, with quite a bit of justification, that every other political party was hopelessly corrupt, incompetent, or both.  The communists were wild-eyed revolutionaries; the various liberal parties were all indistinguishable from the conservatives, and the coalitions they formed were just various iterations of the same cronyism and spinelessness that kept the Depression going.  A vote for the Nazis was the only available “fuck you” to the whole situation that had a hope of being noticed.

This is not to say that some kind of American fascist party is inevitable, with clear and easy analogues to the Nazis.  History’s always messier than that.  But we live in a federation, at least for the moment.  If I had to guess, some charismatic fellow or lady will get him/herself elected governor of a state, or perhaps even mayor of a sufficiently large city.  And then, Texas vs. California-style, folks will start to notice that one polity works way better than the other.  Yes, the governor/mayor has some retrograde ideas and yes, what he/she is really talking about is just better management of the all-intrusive welfare state, but the high-speed commuter rail does run on time, and isn’t it nice that all those boy-men are finally getting off the internets and out of their parents’ basements and getting some exercise for a change?