When I was young, “authenticity” was the watchword.  We young folks had it; our parents — the dreaded Boomers — didn’t.  Their avatar was Bill Clinton, a sociopathic poonhound who could sound like he was right there on the bridge of PT-109 next to JFK when he wanted to, but always acted like a hippie cult leader.  To us, therefore, the greatest sin was hypocrisy.

The naivete of youth, right?  My friends and I really thought Pearl Jam was going to win against Ticketmaster, because Ticketmaster was a greedy corporation run by soulless yuppies and Pearl Jam, the darling cash cow of Epic Records — a wholly owned subsidiary of Sony Music International — ummm….. wasn’t?  Because they wore flannel or something?  Like I say, the naivete of youth.  Smarter folks than me have been deceived by the A&R man, even though we all knew better.  The point is, “authenticity” was something to be striven for, even though we knew we’d never fully have it (and how could you even know if you did?).  Gen X is finely attuned to cognitive dissonance, because we experienced so much of it in ourselves.

Which makes us pretty much the worst possible people to be in charge during the Social Media Revolution.

Just so we’re on the same page: I keep banging on about how new Social Media really is, and here are those numbers again: The early social media platforms (Facebook, Twitter) date from the mid-Aughts; the really brain-melting ones (Pinterest, Instagram, Snapchat, et al) are less than a decade old.  The first mostly-online generation is in college now; the first fully online generation is just entering high school.  The next generation — the truly Internet-addled one, the generation that’s been hooked to blinking touchscreens since infancy, the kids who will slog through a 140-character tweet like it’s War and Peace — is still in elementary school.

This kind of cognitive dislocation is impossible for us to fully grasp.

The closest we can get is a metaphor.  In a good response to a Z Man piece on “Beto” O’Rourke, the commenter calls O’Rourke a copy of a copy.  He’s a wannabe Bill Clinton, who was himself a bush-league JFK impersonator.  This metaphor makes sense to us, because we grew up in a world where copies were physical things — a big humming machine that smelled like burning sand sent a light saber-looking bar across a plate of glass, and a few seconds to minutes later, a piping-hot sheet of paper got spit into a tray.  Even text lost a little bit of fidelity, but reproductions of photographs degraded noticeably on even the best machines.  Photocopy the copy, and what was once a brilliant hi-res photograph looks like amoebas fornicating.

But photocopiers don’t exist anymore.  Not in the way pre-Facebook generations understand them.  Sure, there are a few dinosaur machines still out there, but even for us old folks, most of our “copying” is digital.  Certainly all of our mass copying is, and that means no fuzz, no graininess, no loss of resolution at all.  The printer spits every image out straight from a data file.  You can make a million copies of the same image, and each one will be perfect down to the last pixel.  More importantly, there’s no such thing as a “copy of a copy.”  Why bother trying to physically duplicate what’s already a data file?  I’ll just text it to your smartphone, and then you can turn out a million perfect-to-the-last-pixel reproductions for yourself.

See what I mean?  We grew up in a world where imitation was the sincerest form of flattery, because even the most perfect copies had detectable flaws and the better the reproduction, the more time and effort it took.  They are growing up in a world where “originality” doesn’t even exist, because “copies” aren’t just indistinguishable from “the real thing” — because it’s all just data files, copies are the real thing.

And that’s before you get to the ubiquitous Photoshop-ization of everything in modern life.  Look at anything on DeviantArt.  Is any of it good?  But wait — before you answer, ask yourself the opposite question: Is any of it bad?  How can you possibly tell?  Again, remember that this is a generation completely comfortable with the word “remaster.”  As in, “Here’s Gustav Mahler orchestrating Beethoven’s 9th… but we’ve cleaned up the strings, auto-tuned the vocal, and re-engineered the drum track.  Plus we cut that last movement, because it’s overplayed.”  Telling any one of these kids that their stuff looks like knockoff Roy Lichtenstein is an insult, all right, because Lichtenstein didn’t even have Photoshop and so all his stuff looks worse than the knockoff it is.  Plus he’s a dead White male, soooo……

What I’m trying to get at, I guess, is that this generation won’t understand why Lichtenstein was a significant artist (and for the record, I’m not a fan), because the terms don’t even make sense anymore.  It’s not (just) historical ignorance.  Show them the side-by-side of “The Bedroom at Arles;” they’ll get the context they need. 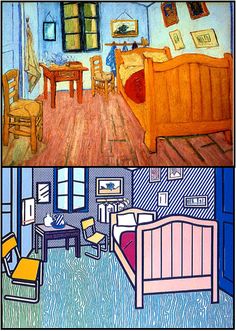 What they won’t get, because they can’t, is the significance.  “Lichtenstein thought that Van Gogh paining looked cool.  He ran it through an Instragam filter and posted it.  So what?”  Art isn’t just a conversation with other artists; it’s a conversation with the truth both artists are trying to express, and that can’t possibly make sense in a world where every single thing you see, read, and hear is easily manipulable.  By anybody.

This explains, I think, the upcoming generation’s unparalleled ability to forget, to ignore, to crimestop.  Nothing you do really matters, because in some profound sense, you’re not really you at all — you’re a collection of traits, each selected a la carte from a million identical, and identically reproducible, elements.  I often quote a joke I stole from one of the few funny Simpsons episodes of the new millennium: “Nobody’s better than anybody and everyone’s the best at everything.”  It’s funny to us — that is, to the pre-Facebook version of humanity — but in a very real way, I sense, this is the post-Facebook generation’s life.  If every element of everything can be assembled willy-nilly, and the result perfectly reproduced an infinite number of times, then nobody really is different from anybody and everybody really is the best at everything.

Or not, because it doesn’t really matter anyway. That Vincent guy must’ve thrown a picture of his bedroom through a “Van Gogh” filter on his iPhone.  It looks like shit, and so does the one that Roy guy did — what is this, one of the early game apps?  Horrible graphics.  Drag-and-drop both of them into the recycle bin, and start over.  As many times as you want.

That’s why O’Rourke has a decent shot in the Democratic primary.  Just don’t sound like too much of a lunatic — not hard, considering the rest of the field — and let the voters decide that it’s ok to vote for the White male just this once more.  What are we up to, the third “reboot” of Spider Man this century?  Compared to that, a reboot of Bill Clinton is no big deal, and since the alternative is Donald Trump…

5 thoughts on “It’s a Photoshop Life”