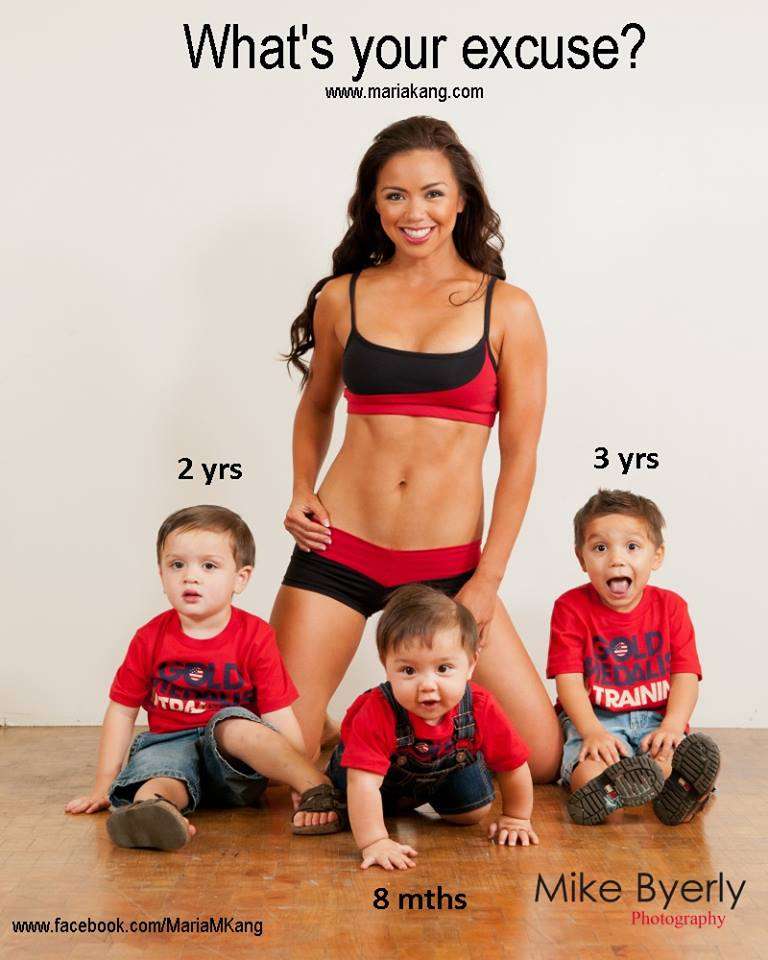 Got a big controversy over the above photograph. She’s a local lady here, who’s created a national uproar. I guess it’s the “What’s Your Excuse?” line rubbing some people the wrong way.

Jack Armstrong of Armstrong & Getty was complaining that her occupation has been toned down, failing to find mention in articles like this one. She’s some kind of fitness trainer or something. So I guess the rebuttal would be…”my excuse is that I’m not a fitness trainer”? And it would seem I can throw stones like everyone else at hapless Maria, since I’m not a fitness trainer either and I seem to have packed on thirty pounds plus over the last couple years. So pass the rock and let’s get in line, right?

Sorry, no dice. This is not about fat.

There are two kinds of people in the world. Some say, “if one guy did it anywhere, that means anybody else who wants to, can do it everywhere.” The other kind say, “if one guy somewhere can’t do it, then nobody else should be able to do it either.” Perhaps the Facebook ladies getting all pissed off at Ms. Kang have hit a compromise: “I’m willing to do what it takes to get the weight off, so long as nobody, anywhere, does or says anything to make me feel bad.” It’s that last set that is the problem here, not Maria Kang. You have to choose your battles. The fact is, a lot of people who have weight problems simply want to have everything as good as they can possibly have it, every waking minute of every day. Why get a Quarter Pounder, when there’s a Double Quarter Pounder right next to it for only another dollar? “She said something that rubbed me the wrong way, now I must start a revolution” — that’s just an extension of that. Feel feel feel, every situation that comes along, it’s all about how it makes you feel. That’s how people put on weight.

You know, there are certain truisms about criticism, whether the criticism is personalized or not: Criticism is almost never one hundred percent on-the-money. It’s always wrong somewhere. But it very seldom entirely misses the mark, either. You have to, as the adage goes, “take what you like and leave the rest.” In the case of criticism, nobody likes any of it, so what you need to do is take what will help you and improve your situation…and leave the rest. Did Maria Kang’s flippant comment entirely miss the mark? With everyone?

Let’s answer that question with another question: Are the complaining-people not answering her question rather directly? “My excuse is that you’re making me feel bad about myself.” And in so doing, are they not proving the question has more than a little merit? “What’s your excuse” means, boiled down to its essentials, “how little does it take to make you abandon your goal of a better body?” And the answer is “some stranger on Facebook posting pictures I don’t like.” Pretty low bar. So there’s opportunity for improvement there.

The real tragedy is this: That is precisely the problem Ms. Kang was trying to solve, if I’m reading her message right. And I think I am. She took the time and trouble to reach the emotionally sensitive types, the kind of people who aren’t inclined to say “no pain no gain,” just-do-it, the kind who have not yet pushed past that first milestone. The must-feel-good-all-the-time types. And, those are exactly the ones who are biting her head off over it.

We can have a legitimate argument over whether or not she deployed sufficient tact. But she was trying to help. And the fact is, these people can’t admit that they’re the ones who have the problem. They’re showing the real reason why they don’t look as good as Maria Kang, from the neck down, and nothing is going to change there until something changes between the ears. That makes the whole thing personal, and a bit nasty. Maria Kang didn’t make it that way and neither did I.