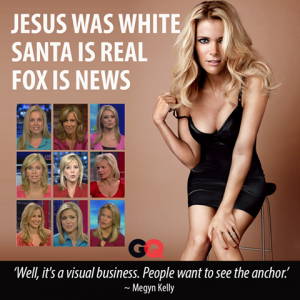 Quick, what color was Shaft?

I saw a meme post from “being a liberal” … picture of Megyn Kelly from a cheesecake photoshoot (because nothing pisses liberals off like a beautiful woman, especially if she doesn’t share their views) that was captioned:

Jesus was white
Santa is real
Fox is news

All of this went back to a segment during which Megyn Kelly said that Santa is white, and apparently that Jesus was white as well.

I don’t really watch cable news anymore.  I’ve caught bits and pieces of Megyn’s show over the years.  I’m aware she has a law degree from Albany, and she’s no bimbo. Not at all racist.  Just a conservative American journalist.  So, as I do when these firestorms get started, I have to go back and watch the segment that people are all upset about.

As usual, the truth doesn’t fit neatly on a bumper sticker.

For those who know so much about how stupid this segment proves Megyn, Fox, and its viewers are, I have a multiple choice question for you.

What was the segment about?

Did you watch the segment? In it, Megyn sympathizes with the columnist for her pain and compliments her writing, but also points out that the legendary character that is Santa Claus, in fact, caucasian — as was Jesus.

The segment is pretty light hearted, but her main point is that just because you don’t like something doesn’t mean it has to change for everyone. But that’s where we are in this increasingly politically correct superculture. The one where the media, Hollywood, politicians, and the educrats live, that is.

The lefty critical theorists with their Pocket Alinskies immediately pounced.  This is what they live for.  Alinsky #5 is “Ridicule is man’s most potent weapon.”  They really take this one to heart.  And while it is true it’s a pretty potent weapon, Alinsky was pretty flexible on the quantity of truth behind the ridicule, and so are they.

The main criticisms seem to be

Well, Shaft isn’t real, either, but imagine the uproar if a re-make was made where Shaft was now white.  But that’s not all.  Santa is, in fact, much more real than a movie character.

Now before I go on, let me make clear that I don’t have a problem with black Santas or black or hispanic or even asian Santas or depictions of Jesus.  Not at all.   Y’all do what you want, I’m good with it.  But please stop trying so hard to wring all the European, Judeo/Christian elements of culture out of American culture.  Just because you’re uncomfortable with it doesn’t mean others should change it for you.  And you certainly shouldn’t be allowed to change it for them.

And don’t get up all in people’s faces for merely stating facts just because you don’t like their point of view.

Santa is a cultural character with a long history in European culture, tracable back to Saint Nicholas, who was Greek, maybe of Turkish descent. 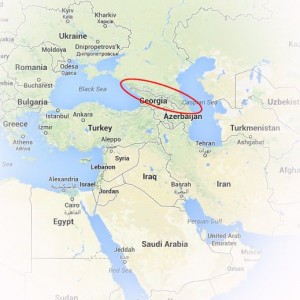 Take a look at the map to the right.  The red ellipse marks the Caucasus Mountains.

What significance does this mountain range have?   Well besides being very pretty, they are the mountain range after which the caucasian “race” was named.   Now, why the scare quotes around “race”, you ask?

Up until fairly recently, if you were filling out a questionaire or form that asked about race in the US, your choices were typically Caucasian/White, Black, and maybe American Indian.

And the kicker is … Jesus was a Semite.  An Arab.  So was St. Nicholas if he wasn’t actually Greek.   And Arabs are arguably the original Caucasians, certainly closer to them than northern Europeans.  So the whole “Jesus was white” and “St. Nicholas was white” question is answered.  Yup.  Does it matter?  Only as a matter of fact.

But Santa Claus isn’t real!!!!   Nobody said the man in the red suit was an actual, real being.  But he is a real legend and a real cultural figure (pre-dating the United States, no less – he’s an international figure) whose character was developed in Holland, Germany, Sweeden, England, etc.  He was always depicted as white, which should surprise no one.  A legend developed by people who were white based on a man who was caucasian – I’m gonna guess … probably going to end up being white.

Big deal.  Why should this bother anybody?   Who says a white Santa can’t “serve” a black child? It shouldn’t matter.  But it does — it bothers liberals very much.  And the reason is is that far from race being unimportant to liberals, race is sacred to liberals.   They need racial differences.  They can’t just be matter of fact.  They need the drama.  They need victims to save from the villian, and the villian is the white man.  They’ve saved one race, to be evil, sort of like Satan from all the angels.

And I don’t make the religious analogy lightly.  It’s a theology to them.  And to be redeemed, the white liberal must constantly beat his chest and point out the evil that is his race.

So Santa Claus is white because that’s who he is according to legend.  You can’t just unilatally change a legend for everyone.  That’s not how legends work.  Regardless of his race, it’s pretty clear he isn’t a penguin. You can replace him with a penguin in your tradtion if you want to, but that’s not Santa Claus, it’s a penguin and you can make up your own legend about it.

You idiot, penguins don’t live at the North Pole!