Over at Z Man’s I had some advice for young White men: Go Muslim.  The objection was mooted that Islam is not a religion for White people, to which I reply: Sure, if you were going to be, you know, serious about it.  I suggest that we take the tenets of Mohammed’s faith exactly as seriously as the Liberals take the tenets of theirs — as an all-purpose virtue scam and get-out-of-responsibility-free card.  Change your name to Achmed Raheem al Shabazz, slap a kufi on your bean, and feel free to tell gays, Jews, trannies, and feminists to fuck right off.  And if someone catches you noshing a bacon-and-whiskey sandwich on Friday night when you should be banging your head on the floor at the mosque, well, you still take Shari’a at least as seriously as Al Gore does climate change.

In fact, I’d suggest that Islam is fantastic for Our Thing, and we all should “convert” forthwith.  Why bother with the cloak-and-dagger stuff of having meetups when we can do it right out in the open?  It’s easy to keep SJW infiltrators out of our mosque — start every “prayer meeting” by reciting the juicier parts of the Koran.  They’ll be so triggered they have to leave, and as a bonus, we’ve fulfilled the actual “religious service” part of our federal tax exemption.  And as for Uncle Sam’s infiltrators, well… have you seen how the FBI operates lately?  I really would not be surprised to learn they start their undercover operations with “Hello, fellow extremists!”

Why aren’t we doing this?*

Ace of Spades’ morning report links to a piece on Taylor Swift’s “political awakening.”  Y’all know how much I hate tooting my own horn, but I covered this way back when.  Ok, ok, so I mostly just linked that for the picture — never let it be said that I don’t give the people what they want — but seriously, how hard is this to grasp?  Swift is now 30, which, since pop tarts age in dog years, means she’s got two generations of younger-hotter-tighter competition coming up behind her.  She’s going to hit the wall at Mach 3 no matter what, so since she’s nothing if not a very savvy operator, she’s getting out in front of her inevitable transformation into a “serious artist” (read: BMI above 15).  Give it another two years, and she’ll be openly embracing those bisexuality rumors, and by the time she’s 40 she’ll be touring with the Indigo Girls.  Sic transit gloria mundi.  At least she can keep herself in the spotlight a bit longer by being an obnoxious Leftist (BIRM, I know).

In the comments to a previous placeholder post, Ganderson remarked

I choose to ignore the question as to why we have charged our colleges and universities with providing semi pro sports entertainment.

So should we all, but since I got nothin’ this morning I’ll address it.  If you’re not up on the history of American higher ed — and no normal person has any reason to be — it’s hard to realize just how recently college was a profoundly conservative institution.  My own discipline, History, was understandably a bit more retrograde than most, but Progressives viewed History departments as dangerous nests of heretics even when I was in undergrad.

It makes sense when you consider what college used to be.  Say what you will about the Baby Boomers and their many, many, many, many, many flaws, but they didn’t learn that shit in college.  The most obnoxious ones were in college in the Sixties, yes, but the vast majority of the Baby Boom generation didn’t go to college, for the simple reason that college back then was expensive.  That was by design, since colleges were always intended to transmit the skills and above all the values of the professional classes.  You went to college to become a doctor or a lawyer, but just as important, you went there to learn how to act like a doctor or a lawyer.

Think of the old classic Animal House.  It’s a “college” movie that would be incomprehensible to any modern undergraduate.  The main characters and the big villain are in ROTC, for pete’s sake.  Pinto and Flounder wear freshman beanies, the sorority girls all dress like they’re going to a debutante ball, and everyone but Bluto wears a collared shirt to class.  With a necktie!!!  Even Bluto’s signature sweater — which I have seen modern undergrads wearing, though they have no idea where it came from**– is worn over a collared shirt: 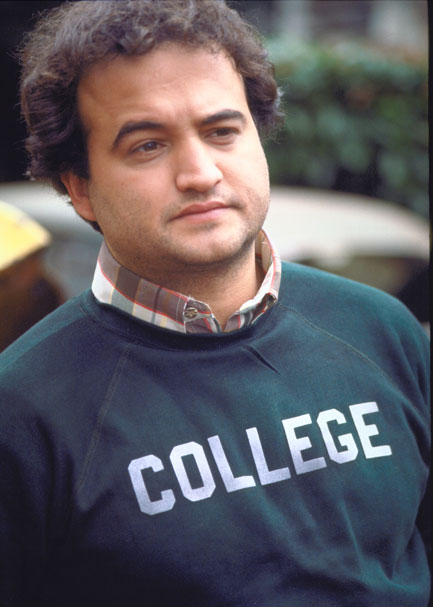 The “everyone goes to college” ethos wasn’t started by a bunch of cowardly hippies dodging the draft, then.  It was started by a bunch of weaselly careerists cashing in on Griggs v. Duke Power.  Which is important, because just as there’s no one more obnoxious about the ancient privileges of the aristocracy than the guy who bought his patents five minutes ago, so no one is more loyal to the Old School Tie than the guy who only went to class to network.

Again, consider Animal House.  It’s set in 1962, but it was made in 1978.  The Delta House guys are fuck-ups, yeah, but the movie is obviously a very loving send-up of that old rah-rah-sis-boom-bah stuff.  It’s an elegy as much as a parody, made by guys who got to college just as all of that was ending (the main writers were in their early 30s; Belushi was 28, as was director John Landis).  Look at how all the characters turned out — Senator John Blutarsky!!

It wasn’t until the mid-1980s, then — that is, when the first batch of Gen X turned 18 — that college sports became a dominant cultural force.  I must’ve written a zillion words on the unifying effect of team loyalty, so instead of re-writing them I’ll ask you to think of how else one could possibly weld a group of disparate people, from all over the country, who are only there pursuing their own personal advantage (if they even know why they’re there in the first place) into a coherent whole.  There’s boot camp, I guess, but short of having a drill instructor in your face all the time — a la Niedermayer from Animal House — getting everyone behind the football team is the only effective way.

If that doesn’t convince you, think about the “boosters.”  I’m retired, thank god, and I was never a “real” academic in the first place, but I’m right up there with the shrillest, fattest, most tatted-out and face-shrapneled feminist Grievance Studies professor when it comes to the fucking boosters.  You’re giving seventeen gazillion dollars to the school, to make sure that the football team has a fourth cafeteria and an on-call aromatherapist?  But again, it makes sense — if there were any direct correlation between “athletic success” and “rich idiot alumni,” Harvard and Yale would play for the championship every year, like they did back in the days when the only other school with a team was Rutgers.

Rich idiot Harvard alums don’t need the football team to win championships, because they went to goddamn Harvard.  It’s only guys like Phil Knight and T. Boone Pickens, who think they deserved to go to Harvard but couldn’t, that feel the need to turn their alma maters into sports powerhouses.  And, of course, the dedicated Progressives who run all of academia are happy to take their filthy capitalist lucre…

*PS I made up the name “Achmed Raheem al Shabazz” totally at random, but it turns out that’s one hell of an inadvertent in-joke.  When I start my career as an imam, I’m going to insist that everyone who joins my congregation puts “Shabazz” in their new name somewhere.

**I know, because I’ve asked.  It’s hilarious to suggest to a coed who thinks she’s being daringly anti-establishment that she should actually watch Animal House.  So much toxic masculinity!  Not to mention the racial stuff!  Wow just wow I can’t even.  I’m surprised they haven’t exhumed John Belushi’s corpse and tried him for heresy like a medieval pope.