Here’s where I disagree with blog-friend Morgan: Some things need to be repeated, ad infinitum, since otherwise our better natures take over and we start giving folks the benefit of the doubt.  Here’s one such hard truth:

Perhaps at this point you want to get into a discussion of what qualifies as “totalitarianism,” in an academic, poli-sci seminar kind of way.  Save it.  Just go look at the video in that link.

Or have a gander at this:

In case you’re not into link-clicking, that’s one of the many Obama songs that were taught and in American public elementary schools.

And that, my friends, is totalitarianism.  As are the following predictable-as-sunrise responses to my assertion:

But since we’re repeating ourselves here, let’s go ahead and knock these out:

People assert Godwin’s Law under one of two circumstances — the troll-busting kind it’s designed for, and when they themselves are busted and know it.  This is one of the latter.

For instance.  Again, if you’re not into link-clicking, that’s a Google search of democrats.com for “Bush Hitler.”  208 results, 0.27 seconds.  Surely our friends on the left would agree that this is legitimate political speech, no?  That it is, in fact, valid to bring up parallels to the Third Reich when those are the most apt to the current situation?

And that itself is an illustration of the American left’s totalitarian mindset, because we know the answer, don’t we?  No, it’s not legitimate to bring the Nazis into it when we’re discussing the folks in charge of the USA, 2008-present.  Godwin’s Law, wingnutz!!1!eleventy.

The first act of any totalitarian movement is to define “the community.”  Only those inside the community have rights within the state.  “The Other” — to use the academic parlance so beloved of our leftist “intellectuals” — is by definition illegitimate; the common rules of fairness, decency, and even logic don’t apply to it.

Racism (“sexism,” “homophobia”) is an interesting subset of the Godwin phenonmenon.  Is this racist? 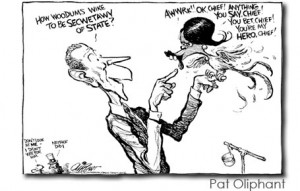 Her greatest hypocrisy is in her pretense that she is a woman. The Republican party’s cynical calculation that because she has a womb and makes lots and lots
of babies (and drives them to school! wow!) she speaks for the women of America, and will capture their hearts and their votes, has driven thousands of real women to take to their computers in outrage. She does not speak for women; she has no sympathy for the problems of other women, particularly working class women.

Emphasis mine, but the words are Wendy Doniger’s, in the Washington Post.  (Wendy Doniger is “Professor of the History of Religions, University of Chicago’s Divinity School” and posts regularly on the Post‘s “On Faith” blog).

The third and fourth objections (ignorance and What about Boooossh!!(tm)) are peculiarly leftist versions of two tired old logical fallacies, the ignoratio elenchi and the tu quoque.  But since they seem to be specific to political discourse — and overwhelmingly, to leftist political discourse — I’m going to rename them here:

[Sic] is a pretty good name, I think, for that special brand of recursively stinky Stink Bomb one so often sees as “your [sic] stupid / ignorant” in the comment sections of political blogs.  Not only does the commenter reveal his own ignorance by misspelling “you’re” (and/or making many, many other dubious assertions), but he never reveals just how he came by this knowledge, or present any facts to the contrary.  It’s often accompanied by some version of “if you don’t see how that’s racist/sexist/homophobic, that just shows how racist/sexist/homophobic/stupid you really are.”  What conservative hasn’t had this discussion in a comment section at some point?:

C: How is that racist?

T: If you can’t see it, that just shows how racist you are.

C: I’m simply saying X.  You come in here and start talking about race, getting all offended on others’ behalf.  Who’s the real racist here?

&c.  The troll usually disappears at this point, but if he doesn’t, it’s a thousand to one that his comments will devolve into an infuriating little maneuver I call The Cuttlefish.  If you don’t want to wade through 400+ posts of that (hide your razor blades and shoelaces before starting), the upshot is that our leftist interlocutors decisively “proved” our “ignorance,” and thus “won” the “argument,” by squirting terabytes of digital squid ink all over everything.  Facts without citations, citations without links, digressions, switchbacks, you name it, and always the constant cut-and-paste reference to one — and exactly one — piece of data they kept insisting knocked all our arguments into a cocked hat.  This is an admittedly extreme example of the general tendency of leftists, who never cease to congratulate themselves for passing freshman year, to try to beat us down with five dollar words and cherrypicked information.

This, too, is characteristic of totalitarian thought.  The only way the community can be made sufficiently airtight — the Other made sufficiently other — is by exaggerating differences and disguising similarities.  Consider the assertion, ubiquitous in 2008, that Sarah Palin is not a real woman.  Only someone deeply invested in totalitarian parathought could hear, let alone repeat, that ridiculous statement without laughing.  And yet respectable intellectuals could, with a straight face and in nationwide forums, claim that a handful of ideological assertions cancel out actual human biology.

[Lest you think I’m overreacting to a metaphor, consider the leftist definition of a “real woman.”  Among other things, it means “supports abortion on demand, under any and all circumstances.”  Their investment in female biology goes far beyond the metaphorical].

2 thoughts on “On the Need for Repetition”