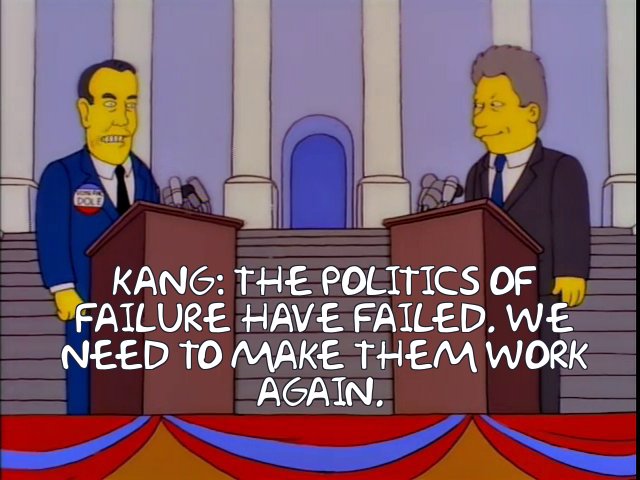 The politics of failure have failed, as a wise man once said.  We need to make them work again.  If I were an aspiring Alt-Right revolutionary — which I am not, and I preemptively disavow all attempts to make me out to be one — here’s what I would NOT do:

What, do you want the Feeb to come knocking on your door?  You might make some money short term, but here’s a free pro tip: Anyone who asks you for money is only in it for the money.  Read the history of successful revolutionary groups.  Is there a Chapter 3: The Great Fundraising Drive of 1926?  No?  There’s a reason for that, sport.  Real revolutionaries are to financiers as Hannibal, B.A., the Faceman, and Murdock were to their clients: If you have a problem, if no one else can help, and if you can find them, maybe you can hire… The A-Team.  Trust me: If you do it right, the money boys will come to you.

Speaking of doing your reading, that’s the first thing I would do: Read up on the life and times of successful modern revolutionaries.  Start with Lenin.  Again, if I were an aspiring Alt-Right revolutionary (and, again: NOT), I’d sign off on the creation of a “vanguard party.”  Lenin’s great insight — and it was great; that’s why it’s “Marxism-Leninism” to this day — was that the iron laws of History need a nudge.  Revolution is inevitable, comrades, but it needs a dedicated cadre of hard-core professional revolutionaries to download the proper “class consciousness” into the masses.  Lenin, Stalin, Mao, Che, Ho Chi Minh, even Kim Il Sung in his inimitable bumbling drunken-uncle way — all of these guys were revolutionaries, and nothing but revolutionaries, from an early age.  Even guys like Nicolae Ceaucescu, who didn’t have the intellectual candlepower to toast bread, had long underground experience, which made them savvy enough to cash in when the real brains of the operation needed a local strongman.

The best place to find your revolutionary vanguard is where the Bolsheviks found theirs: Among the disaffected intelligentsia and wannabe-intelligentsia, i.e. college students.  These guys have enough on the ball to be able to handle basic propaganda tasks, and they’re used to following orders and not asking too many questions.  Best of all, they’re pissed off — they have a burning sense that they’ve been cheated by their society, matched in intensity only by their monstrously huge sense of entitlement.  Look at Lenin himself: A son of the minor nobility whose Dad was a regional schools inspector, he concluded early on that there was no open position in the Russian Empire that would match his talents.  Had the Tsar wised up and made Vladimir Ulyanov chair of the Philosophy Department at some third-rate college, there would’ve been no Lenin.

Male college students today have the same burdens.  They’re expected to go out, get good jobs, form families, and pay taxes… all while the method by which one supposedly gets the tools to do it — college — systematically breaks them down, blaming them and those very aspirations for all the world’s ills.  I wouldn’t wish being an American college boy on my worst enemy — you can’t talk to girls for fear of a false rape accusation; you can’t hang out with the guys without being denounced; and campus is a 24/7 struggle session with you and your bros in the starring role.  Short of drinking yourself comatose and spanking it to pr0n, what else is there to do?

Give these guys a pep talk and a mission — let them feel like men again, and not everyone’s enemy — and they’re yours forever.

I’d start my own off-campus version of Fight Club, basically (if I were actually an aspiring revolutionary, and again, I’m NOT).  If you recall that fine film — which, prophetic as it seems now, was a comedy back in the 90s — male office worker drones felt untethered from their masculinity by Ikea, Martha Stewart, etc. (Brad Pitt as Tyler Durden spoke for an entire generation when he yelled “Fuck Martha Stewart!” over beers with his new buddy Ed Norton).  Soon enough, and solely by word of mouth, underground MMA clubs sprang up all over America… which, as you’ll also recall, Tyler Durden easily turned into a revolutionary terrorist movement.

Give them a catchy name and an easily identifiable symbol, both of which are — crucially — plausibly deniable.  I suggested “The Sons of Valley Forge” in the title, and while that’s probably a bit on the nose (too obviously patriarchal), something like that would work.  The kids you’re recruiting will never have heard of Valley Forge, but it’s a great story — the hardest of hard men, enduring unimaginable privations, for the sake of family, country, and freedom.  It also lets you piggyback on widely-available (thus, plausibly-deniable) symbols.  Make an all-white New England Patriots ball cap the SOVF official uniform, and, while the first rule of SOVF is “don’t talk about SOVF” (the second rule is, “don’t talk about SOVF!“), members can easily recognize each other by their headgear (and, later, by their close-cropped hair, close-trimmed fingernails, facial lacerations, etc.).

Keep no membership rosters, meet nowhere known to the university, and communicate only in code (it can be — indeed, should be — fairly obvious code), and you’ll have everything you ever need.  A TOR browser and a website, lightly disguised — say as a mild-mannered blog with multiple authors who only write about fluff — and you’re set.  Decentralization is key.

Once set up, all you have to do is…. pressure.  Nothing overt, and certainly nothing illegal.  There are no laws against boycotts, and while actually announcing a boycott would conflict with the First Rule of SOVF (“don’t talk about SOVF!”), there’s no law against groups of strapping young men in white Patriots hats cruising by the windows every half hour on the half hour, asking potential customers just why they’d choose to shop at that particular store.  Your History TA getting you down with her constant bagging on White Male Privilege?  An entire classroom full of those definitely-NOT-SOVF hats, staring silently at her, would probably do wonders for her attitude.  Keep it local, and for God’s sake keep it legal, but musing “gosh, this sure is a nice ___; wouldn’t it be a shame if something were to happen to it?” has been a staple of our friends in Their Thing for quite some time, for a reason.

The only reason SJWs get away with as much as they do is, they’ve got the whole place terrorized.  They don’t have to make overt threats, but they do — they form screaming mobs about anything and everything, all the time (have you noticed?). This is because they know nobody will push back against them.  Well… what if someone did?  Mere symbols can work wonders.  Ask Cornelius and Tyler Durden.

That’s what I’d do, anyway.  Or wouldn’t do, because again, I disavow all this.

11 thoughts on “Psy Ops: The Sons of Valley Forge”