Back when we concerned ourselves with the actual behavior of real humans — that is, before we retreated entirely into the political fantasyland of Race / Class / Gender — historians vigorously debated mentalites (say it French-style for ivory tower street cred — mon-tall-ee-tays).  What did people think, and how did those beliefs drive their actions?

It led to some fascinating speculation.  If Julian Jaynes is right, for instance, then pretty much everything we know about the ancient world is wrong… but it doesn’t have to be that radical.  Take “literacy.”  How much information can you convey without written language?  This, for instance 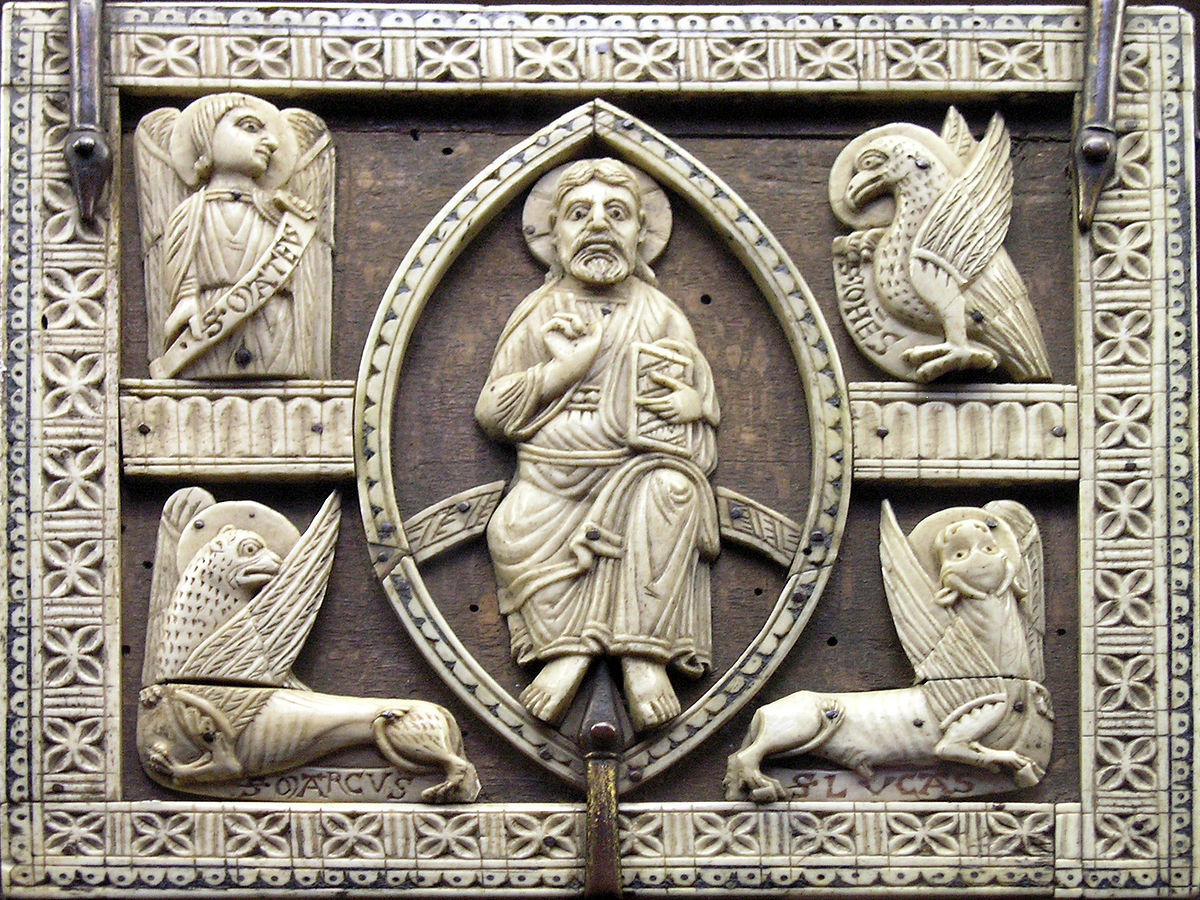 is a high-medieval depiction of Christ surrounded by the four Evangelists (clockwise from top left: Matthew, John, Luke, Mark).  We assume this is didactic, as were all the carvings on medieval churches.  But: What does it teach?  Can you convey complex moral instruction this way?

It matters, because people in a society more complex than a small subsistence village has to be able to hash things out for itself.  “Don’t murder” is a pretty easy rule, you’d think, but even that can get muddy pretty quickly.  What if you legally deprive a man of everything he has, and his ability to get more?  Isn’t that tantamount to murder?

This is why some historians once claimed that “the Christian centuries” weren’t actually Christian in any meaningful sense.  In the tiny world of your ancestral village, there’s no need for theology.  The “Christ” you pray to might as well be Jupiter, or the Divine Augustus, or Cernunnos, or Nature herself.  Just do what you have to do to keep the priest happy, such that the divinity blesses your crops.  Chant the paternoster?  Ok.  Put money at the foot of the statue?  Sure.  Human sacrifice?  If you say so…

You only get complex thought, it seems, with writing, and you only get that in a city.  And even there it takes a long time – Linear B, for instance, is mostly for keeping lists.  Even stuff like Egyptian hieroglyphics, which can seemingly convey complex, abstract, information, isn’t didactic… for people.  It’s right there in the word — “hiero-glyphic” means “sacred carving.”  The Pyramid Texts contain scads of abstract information, but they’re addressed to someone who’s already dead.

What you need, then, is a group of urban-dwellers.  More than that, though, to really get written language going — to develop a writing that can easily convey abstract information — you need rootless cosmopolitans.  Check out this list of written languages.  Though some of them were used by cultures with large empires, the writing was brutally complicated, carried out entirely by a caste of specialists who did nothing but compose letters.  Only heavily urbanized trade cultures, like the Phoenicians, developed phonetic alphabets… after which, like magic, you see the birth of modern thought.

The point of this long excursion through palaeography is to highlight the relationship between written language and abstract thought.  Which seems like a pointless rehash of the obvious, except….

…. the process is reversing.  English (which in modern times should properly be called “American”) is the most efficient language ever devised for conveying abstract information — entirely fitting to a race of tinkerers.  But even American isn’t for rootless cosmopolitans.  Our language is full of proverbs, allusions, tropes and schemes and figures of speech of all kinds, none of which make sense outside of a shared culture.  And even though the American language will happily co-opt any useful word from another language (e.g. a calque like “brainwashing”), it still relies on those figures of speech to get meaning across.

See, for instance, the metonymy “top brass” (from the linked list of figures of speech).  It means “the upper level of leadership in an organization.”  It is itself metonymical — “the brass” meaning “officers.”  The only way you’d know that, though, is if you were familiar with the military.  But not the modern military, which wears sewn-on badges of rank in most situations.  Only formal uniforms have metallic badges, none of which actually look like brass.  Gorgets do, but those went out in the 18th century (here‘s George Washington wearing one as he goes off to fight the French and Indian War).

But that’s just history.  In practice, I doubt actual soldiers use the phrase “top brass” much anymore (given the military “leadership’s” set of priorities these days, I’m confident that the words most soldiers use for their commanding officers all have four letters).  Moreover, most Americans have never been in the army; lots of Americans don’t even know anyone who has ever been in the army.  When we civilians use the phrase “top brass,” then, we don’t actually mean “the upper level of leadership in an organization;” we mean either something like “the powers that be” — the vague, utterly unaccountable someones who seem to run things with no reference to us proles — or something like “a guy with very little actual power who carries on like the little king of everything.”  As in, “Tommy just got promoted to head fry guy on the afternoon shift, and all of a sudden he thinks he’s top brass — just him and Ronald McDonald running things.”

“Tommy behaves in the manner of a general in command of an army.”  That’s meaningless — have you ever even met a general, let alone been around one when he’s generaling?

“Tommy behaves as if he has more power than he actually does.”  Well, ok, but… what does that mean?  Tommy issues his orders (which is what we assume a general does all day), but Tommy actually has the power to do that — he’s the head fry guy, after all.

“Tommy insinuates that he has knowledge of the company’s inner workings that he doesn’t.”  Does he?  How?  How would you know?

“Tommy behaves arrogantly.”  That’s getting closer to what “Tommy thinks he’s top brass” actually means, but what if he’s that way all the time, or for non-work-related reasons?  Maybe Tommy is also the captain of the football team and the prom king.

“Tommy behaves more arrogantly now than he used to.”  Ok, now I think we’ve got it, but…. what’s “arrogant,” anyway?  See what I mean?  Even that — arrogance — is highly culture-specific…

Modern communication — Internet communication —  is truly rootless cosmopolitanism.  How can you say that Tommy is behaving in a way that intermittently oversteps the bounds of social convention in a specific context — which is the most bare-bones meaning of “Tommy thinks he’s top brass” — if there’s no “social convention” in the first place?

Our language encodes our culture.  The bulk of the abstract information written language conveys isn’t stuff like the Pyramid Texts, about the geography of the afterlife and whatnot.  Rather, it’s a set of common expectations.  Calling Tommy “top brass” is a mild, chiding insult.  You can express the same idea with “he’s gotten too big for his britches” or “he’s all puffed up” or any number of other idioms, but they all have the same purpose: To reinforce social norms.  “Tommy thinks he’s top brass” highlights the fact that we’re not in the army, and Tommy’s not our commanding officer, so he should stop acting like he’s a better person than the rest of us.

To Generation Snowflake, however — raised on blinking touchscreens; for whom slogging through a 120 character Tweet* is the equivalent of reading War and Peace — the phrase “Tommy thinks he’s top brass” is meaningless, baffling, frustrating.  Tweets, text messages, Facebook posts, blog comments etc. aren’t sequential– how often do you see people even here, on a blog with 14 readers, commenting on posts from a year or more ago?  They’re contextless, by definition, and I can prove it.  Go back through your Facebook posts or Tweets (if you’re one of the few remaining sane Americans who don’t do social media, get on your grandkids’ accounts).  Start scrolling back.  After a month or two, the whole page might as well be in Swahili.  Oh, look, there’s a picture of Dwayne “The Rock” Johnson on a beach, with the caption “I got this!” photoshopped onto it.  What the hell does that mean?

Which brings us, at long last, back to the start.  Can complex thought be conveyed graphically?

For every historian who speculated that Europe wasn’t meaningfully “Christian” until the Early Modern era because you can’t do theology with altar carvings, there were ten who pointed out that pictures are aide-memoires — they don’t tell the story, they recall the story, i.e. the teaching of the local priest who, after reforms like Gregory the Great‘s, was probably halfway decent….

… but that, in turn, presupposes a tight-knit community with a long tradition.  Which you had in the Middle Ages, but now?  There are no cultural touchstones, only each moment’s memes.  Cultural expectations, such as they are, are conveyed by movies, all of which are sequels to prequels of reboots.  Orwell said that the purpose of Newspeak was to make forbidden thoughts impossible by eliminating the language used to express them.  He thought this would take a massive, decades-long effort to rewrite the dictionary.  But then Twitter happened, as my students would’ve said back in my teaching days, and we threw the whole damn thing out voluntarily in the space of a few years.

If it’s possible to convey abstract information with memes, we’d better find out awful damn quick, before our society volunteers to go fully autistic.  If not, well, we’ll be seeing how they did it in the Middle Ages up close and personal here in the next few decades.

*If you doubt that we’re well and truly screwed, that article is about the best illustration I’ve got.  The length of the average tweet, it reports, is 33 characters.  The preceding sentence used 48 characters, not counting punctuation marks.  Simply grunting and pointing is a more effective communication method.

6 thoughts on “Putting Ourselves on the Spectrum”