In Postcolonialism’s case (discussed below), 50-cent words do the flipping — by the time you get a handle on what they mean by words like “alterity,” “subaltern,” and so on, you’re already lost in the weeds.  Feminists do it with 50 cent words plus bitchy screeching, but the result’s the same.

For instance, the feminist will tell you that “gender” is a “social construction.”  After which, she’ll demand that we “interrogate” the “systems of oppression” by which “patriarchy” violates the rights of women, homosexuals, the transgendered, etc.

In the feminists’ case it’s even funnier, as the more radical among them are engaged in a long-running TERF war with the trannies.  TERF are “Trans Exclusionary Radical Feminists,” and they hold the ur-patriarchal belief that having a dick makes one a male.  Thus, they exclude the “transgendered” from their female-only safe spaces.  And I know you’ll be shocked, shocked to learn that they’re not real polite about it: 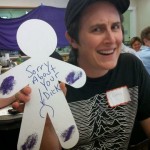 Like the Al-warmists, then, we’ve got a bunch of impeccably orthodox Postmodernists arguing that in just this one special case, a fact is a fact and words mean what they mean.

The way to immunize yourself from all this, I’m starting to think, is to throw away the dictionary.  Most Americans have a reflexive respect for academia, so we assume that big, odd words like “reification” must mean something really deep.  They don’t.  They’re just question-begging bullshit.  If someone throws a word like that at you, don’t ask for clarification.  Just assume he’s a charlatan and walk away.  Or, if you can’t just walk away, do NOT let him drag you into the weeds of a technical discussion.  They’ve spent years (and tens of thousands of dollars) practicing this stuff — I can assure you from extensive personal experience that academic “discussions” are little more than buzzword-quoting contests.  Keep it superficial — they don’t really know what they’re talking about, and if you disallow jargon, that becomes painfully obvious.  When they call you a dude-bro (rapidly replacing “racist” as the go-to conversation-stopping insult), you know you’ve won.

One thought on “Question-Flipping: Feminism”