Ace of Spades links to a report that Tara Reade told her future ex-husband about Joe Biden groping her back in 1993. The testimony in question — their divorce proceedings — dates from 1996. Which proves, if nothing else, that Reade’s allegations aren’t a last-second put-up job by unhinged partisan hacks, a la Blasey-Ford.

From this, Ace concludes:

I don’t see how he continues as the nominee. I wish I could — he’s so damaged he’d be an easy win.

Wasn’t it Freud who said the definition of insanity is doing the same thing over and over again, yet expecting different results?

Democrats don’t withdraw. They don’t resign. There have been two that I can think of who have been forced out in the modern era: Eliot Spitzer and Anthony Weiner. Both New Yorkers, and as New York is the definition of a one-party state, there were lots of powerful Democrats with vested interests going against them. These were, effectively, palace coups, not responses to the voters’ moral outrage. After all, who the hell else were they gonna vote for? A Republican? Get outta here!

And then Trump happened, as my students would’ve written back in my teaching days, proving that even token gestures were unnecessary. Trump’s romantic resume is exotic enough to give a French politician pause. Conventional wisdom says a guy like that can’t get elected dog catcher in a Puritanical country like America… but wouldn’t you know it, Evangelicals came out as some of Trump’s strongest supporters. Plus ça change and all that, oui?

The Media, in the form of the New York Times, has already explicitly said that they won’t be investigating Reade’s allegations — unlike the flaming-hot topicality of the Kavanaugh hearings, the 2020 Presidential Race is one of the Media’s famous “local crime stories,” at least as far as the Democratic nominee is concerned. 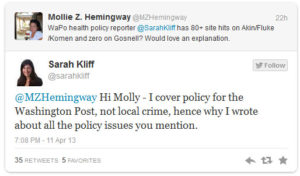 Hell, the Media are degenerate enough to consider dragging their senile (alleged!) rapist across the finish line as a personal challenge, and as for the DNC, they didn’t blatantly rig the Iowa Caucuses (and the SC primaries, and Nevada, and etc.) to let their guy down now. It’s Biden or bust. They’ll simply pronounce the allegations “debunked” like they always do, and if they’re ever forced to mention it again, they’ll resort to the tried-and-true “Republicans pounce on debunked allegations.”

b) his defeat will do such damage to the brand that he has to go.

In that case, he won’t be forced out over anything so ticky-tack as a credible rape allegation. No, if that happens, Hillary’s fixers will make sure ol’ Sundown Joe has an “accident.” I mean, who hasn’t severed his carotid artery while shaving and juggling loaded revolvers?

8 thoughts on “Quick Take: The Definition of Insanity”