A couple of months ago, the SciFi channel put out a wonderfully cheesey, hyper-hyped 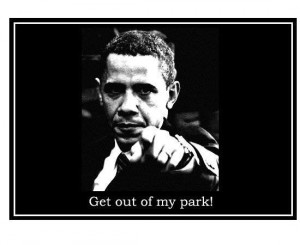 bit of “disaster” theater that was so ungodly unbelievable that it was actually entertainingly hilarious to watch.

Today, our Community Organizer In Chief has been a catalyst in hyper-radicalizing the Democratic party with a blanket application of Saul Alinsky’s Rules for Radicals.

What you saw during the sequester, you’re seeing turned up to eleven.   Barricading national monuments that are so low maintenance …. they’re pretty much things you walk by and look at … to threatening to arrest chaplains who even voluntarily minister on bases.  Petulant.  Spiteful.  “We’re in control.”  “You do what we let you do and nothing more.”

We The People pay people to tweet for Michelle Obama.  Really?

Things are being exposed that … frankly need to be exposed and … thought about.

The administration is trying to inflict pain on We the People so that we will demand they turn all these things back on, and thus pressure our representatives to … cave  That’s the plan.  It’s all layed out in Rules for Radicals. (update: 10/7/2013 – no, this is really what they’re doing.  And they’re saying as much. “We’ve been told to make life as difficult for people as we can,” an unnamed park ranger told the Washington Times. “It’s disgusting.”)

This is cheesey political disaster theater.

The first day, Vets pushed the barricades aside.  Today they’ve wired them together and put guards up.  Guards.  To keep people who came to pay respect to their fallen brothers by looking at a monument that is not dangerous, does not require any day to day maintenance – costs nothing for people to look at. But the same government branch that is trying to highlight that it doesn’t have the money to pay the people who, day to day, need to do nothing but maybe give direction and pick up trash — oddly does have the money to put up barricades and pay guards to keep people out.  For.  What?????

And it’s been offered the money by the GOP controlled House … which ultimately has the Constitutional authority to fund … to keep those monuments and park staffed, but that offer has been rejected to protect the biggest government power grab in the history of this country, the ACA … under which my daughter-in-law and grandson’s health insurance is going up 30 to 40%.  (These are not wealthy people with Cadillac plans, either)

This is NOT America.

This should backfire on them.  Big time.

What might help is for a few 90 year old WWII Vets to engage in a little civil disobedience .. and get arrested.

Oh yes.  The Administration fears this.

And if it doesn’t, it’s reached the point of dangerous, arogant cockiness.

#Shutnado.  Tweet it. Comment it.  Always with some example of the ridiculous political theater that is …. #Shutnado.