I like diversity. Without it, my life would be one boring continuous slog through sameness. I love trying different foods, meeting different people, seeing different scenery, and enjoying different experiences. But this diversity obtains because I desire it — there is no need for some bureaucrat to mandate it into my life. True diversity comes from the freedom to choose the best. In my professional life, I have worked with and befriended team members from Korea, Japan, China, Hong Kong, India, Pakistan, Ireland, France, Italy, Turkey, Hungary, England, Syria, Jordan, Israel, Canada, and from all over the United States. These talented men and women were picked because they excelled in their chosen profession, not because of their looks or background. And because the companies I worked for wanted to pick the best people for the job, the natural outcome was a wide diversity of people, ideas and backgrounds. It was freedom, not the soft-racist cry for diversity at all costs, which made this outcome possible. And the companies were better off for having hired the best, not for filling some mandated quota.

That’s not how liberals see it, however. They believe diversity should be an end in itself. A hoary old chestnut of American liberalism is “Diversity is our strength.” Is that so? In my experience, it works the opposite way. When we look primarily for strength — the will and ability to accomplish the task at hand — diversity will be a natural side benefit. But when diversity is championed as the primary goal, it’s strength that suffers.

The city’s Civil Service Board and the U.S. Department of Justice have agreed on a lower passing score for the police recruit exam after it was rejected because not enough blacks passed the exam.

Dayton has decided it is no longer seeking the best recruits for its police force; it’s more important for the police to look racially diverse. To fulfill this mandate, it decided to lower its standards, which means that less-qualified people are getting police jobs in Dayton. The quest for diversity for its own sake has resulted in lower-quality police officers. Diversity is our strength? Not in Dayton’s police force, it’s not.

This brings me to the main thrust of my article: the recent decision by the U.S. military to allow women into combat roles. I see this as another quest for diversity for its own sake, at the cost of getting the best soldiers for combat situations. 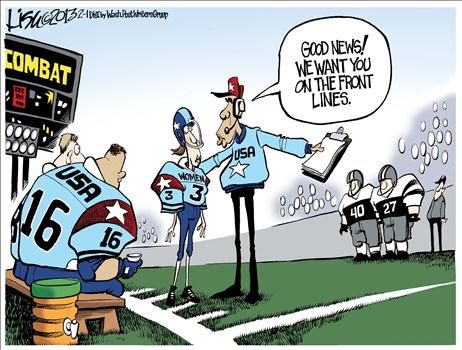 In a scene from the cult film Joe vs. the Volcano, Joe’s boss Mr. Waturi asks repeatedly in a phone conversation, “I know he can get the job, but can he do the job?” Replace “he” with “she” and you have the key question to ask about placing women in combat roles. For the most part, women are neither as big nor as muscular as men. This means that women wanting to fill combat positions, where strength and endurance are key to survival, will be at a marked disadvantage from the beginning. If I were an army private wounded in combat, I would want my squad mate to be strong enough to toss me over one shoulder and run me out of danger. I wouldn’t care whether my mate’s first name were Sam or Samantha; I’m focused solely on the end result. But the likelihood of a Samantha being able to execute that life-saving task is far less than it is for a Sam.

“But Captain, there are strong women who can pass the physical requirements.” Sure, there are some very fit women who can pass the requirements, but they are the exception, not the rule. And I’ll bet you dollars to donuts that when the desired number of women fail to meet the physical requirements for military service, the number-crunchers’ first instinct will be to lower the requirements, just the way it was done in Dayton. End result: fewer prepared combat troops and more casualties in battle. How is this a good thing again? 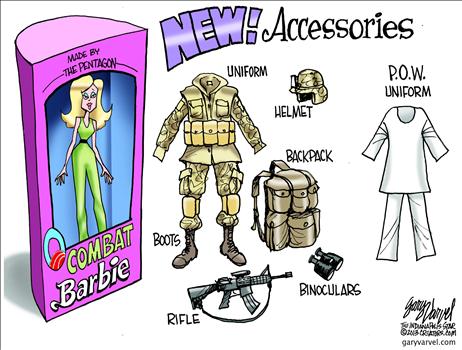 There is also the question of unit cohesion and behavior of the troops during combat. John Luddy wrote the following for the Heritage Foundation back in July 27, 1994:

History shows that the presence of women has had a devastating impact on the effectiveness of men in battle. For example, it is a common misperception that Israel allows women in combat units. In fact, women have been barred from combat in Israel since 1950, when a review of the 1948 Arab-Israeli War showed how harmful their presence could be. The study revealed that men tried to protect and assist women rather than continue their attack. As a result, they not only put their own lives in greater danger, but also jeopardized the survival of the entire unit. The study further revealed that unit morale was damaged when men saw women killed and maimed on the battlefield.

Ignoring the lessons learned from 1948, Israel decided in 2000 to put women back into active combat roles. My response echoes that of Mr. Waturi: I know she can get the job, but can she do the job? Time will tell, but hopefully not at a high cost in blood and lives.

“Diversity is our strength,” liberals like to claim. But when they value diversity more than strength — more than human life — the end result is often weakness, and it can have a terrible cost. That’s what happened to the police force in Dayton, Ohio, and it’s what happens each time liberals push for diversity for its own sake. In the end, liberals prove Quinn’s First Law to be in full effect: Liberalism always generates the exact opposite of its stated intent.