Here’s a question I‘d like to see answered: when you leave your home, do you lock your door?

I can’t answer for you, but I do. The phrase, “a man’s home is his castle” certainly applies to me, and I rule here as a benevolent monarch, just as long as my wife allows me. I don’t lock up my house because I hate people, but because I want to know who is in my home. People have no right to enter my home without permission to do so.

“You’re just one of those weird types who hates people!” Ah, no, I just said I don’t. I just simply believe in boundaries, and no one should enter my home without being invited in first. Just like vampires. But if you’re invited, then you’re more than welcome in my home. Several years ago, I received a request from a friend passing through town. She wanted to know if she could crash for the night. I happily told her that she should consider herself at home, but she’d have to let herself in since we were out of the state at the time. I trusted her to be a good guest in our home and to make sure it was properly locked up once she left. She didn’t disappoint.

So you need to be invited to enter my home. I don’t care whether you come in to steal my stuff or just to clean things up, like Sue Warren.

Police in Westlake say Sue Warren of Elyria broke into a home last week and began tidying up, but she didn’t take anything. They say she then wrote out a bill for $75 on a napkin and included her name and address.

One officer says Warren told him she does it all the time. Only now, she’s in jail on a burglary charge.

Wow. Imagine being arrested for burglary, just for doing jobs that people don’t want to do. OK, that’s a little snarky, but I think you can see where I’m going. Just as my home is my castle, and I reserve the right to admit only the people I choose, this same principle extends to the borders of the United States. We have rules in place to determine who may enter and who may stay. We may choose to amend these rules, but if we simply ignore them and turn a blind eye to those who break them, it sends a clear message to scofflaws and squatters that they can trespass with impunity. If this goes on, eventually certain parts of our nation may become too dangerous for law-abiding citizens to inhabit.

Let me be clear about this: I don’t care where you came from. American citizens came from all over the world. We’re proud mutts, and most of us can trace our ancestry to half a dozen nations or more. Since America has always selected its citizens for excellence, the result has been astounding diversity, and we’re better and stronger for it. But would-be citizens have always had to go through the process of naturalization. We want more Americans, but we want them to be here legally. We welcome visitors from other nations, but they must maintain valid visas to stay here. 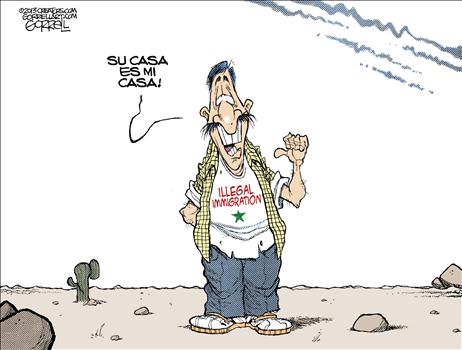 This Thursday will be our second Soup Night of the year. The last time we made three soups and had about ten people to gobble them up. So far we’re on track to entertain many more this time. We supply the soup at these gatherings, but people are responsible for bringing their own bowls and spoons, and maybe some bread, too. Since it was well received last time, we’ll probably continue Soup Night every month or two just because it’s fun. My wife reminds me it’s also delicious. But if we ever reach a point where total strangers start walking into my house, picking up bowls and scarfing down food like Goldilocks, we’ll stop having Soup Night.

I can’t speak for everyone, but I love guests, whether in my home or in my nation. But people who break in, regardless of their motive, get my dander up. It’s nice that some of them are cleaning up and doing chores around the place, but that doesn’t change the fact that they broke the law to get in. Such “guests” need to be shown the door. And if we lock our door at home, it makes sense to lock the nation’s door as well.