Over at Ace of Spades they’re talking about “red lines,” political acts beyond which one can’t continue supporting a party.  They’re the usual — gun control, shamnesty, Obamacare — but the specifics aren’t important.  It’s the larger point that counts:

Right now we’re stuck in the seemingly endless back-and-forth between “but the Democrat is always so much worse!” and “too bad, it’s time to blow up the GOP and start over.”  But please note:  The Left is doing the same thing.  Your average rank-and-file low-info idiot liberal is happier these days (insofar as those people can be happy) than your average rank-and-file Republican, but the committed base — the people who actually win elections and drive policy — consider their guys squishes and DINOS, certainly up to and including Pharaoh Obymandias.  Trust me:  I near a college.  All my neighbors think liberalism starts with Dennis Kucinich.

In both cases, it’s the basic failure of democratic institutions that matters.  The next step isn’t the demolition and reconstruction of one party or the other; it’s the negation of party itself.  How many times, the Ace of Spades crowd quite reasonably asks, will we be fooled by the likes of Marco Rubio?  These days, the easiest way to elect a Democrat is to vote for the Republican candidate and wait a year.

Largely as a result of these types of victories, liberals are even closer to bidding adieu to the party system.  Go read some of their rhetoric:  They’re not mad that Obama got caught in his various scandals; they’re furious that he failed. This ring a bell? 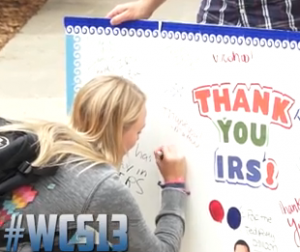 Those are University of Colorado students thanking the IRS for auditing conservative groups.  Had all this stuff come to light after the total destruction of the Tea Party, well… what difference, at this point, does it make?

We’re still conditioned to think in terms of philosophies, of party platforms.  And based on those, yes, there are still significant differences between Republicans and Democrats.  But their behavior in office is another thing entirely.  The reddest red districts and the bluest blue ones both see their guys going an alarming shade of purple once they show up in DC.  What principle, other than power for power’s sake, can you discern from Barack Obama’s actions, as opposed to his pretty, pretty telepromptered words?  From Hillary Clinton’s?  From Paul Ryan’s?  From Marco Rubio’s?

How much longer can that go on?

All it really takes is one guy to win one election, in one place, one time, and the internet can take care of the rest.  He’ll pose as a pragmatic centrist and call his group Americans for Efficient Government or something.  Low-info voters will like him because he gets things done, and if his platform is a mishmash of self-contradictory nonsense, well, it’s not like anybody really reads those things anyway.  High-info voters will like him because he knows how to flatter their egos… or because they’ll soon realize how dangerous it is not to (it’s much easier to capture a small institution than a large one, and low-level local harassment is easier to hide).  His public ideology will be a dog’s breakfast of evangelicalism and socialism, with constant promises to deliver state services more effectively than anyone else.  If his ideas about some things are kind of retrograde and his supporters seem to be compromising some of their core principles in the interests of “efficiency,” well, what are you going to do when inflation’s in the triple digits and gas is $8 a gallon?  Throw in dramatically unsafer streets (thanks, amnesty!) and underfunded municipal services (thanks, public sector unions!), and you’ve got….

2 thoughts on “That’s How It Starts”