Yesterday I implied that all revolutions which attain power eventually devolve into what I called Big Man-ism. Oh, look, there’s even a Wiki entry for it, though they try very hard to find examples of White, or at least non-African, people doing it. Well, I’ll help you out, buddies, but first things first:

One of the main reasons Africa is such a mess is that Africa is patrimonialist to the core. This is hardly unique to Africans, of course; one of the big stories of human cultural development is the move away from patrimonialism and towards an “objective” nation-state in Europe. Think of it in terms of loyalty to la Patrie, as the French say — the idea of “France” as a separate politico-cultural space, instead of personal loyalty to the monarch. “Fight and die for the General Assembly” wouldn’t rally any troops, but la Patrie en danger! certainly did. That wouldn’t have worked even two hundred years prior, when “France” often quite literally meant “the king’s physical person” — in pre-Modern diplomacy, the sentence “France is descending into Italy” meant that the King himself (or at least his most trusted, sworn deputy) was going to Italy.

Diplomacy, and international commerce, simply couldn’t work any other way. Given communication speeds, the monarch’s (or company’s) representative had to be considered, legally speaking, to be the same thing as the monarch (company) himself.  That’s the original meaning of “personhood,” as in “corporate personhood.” There was once a verb to personate — X personating Y meant that X was to be legally considered the same thing as Y in certain circumstances, so that the king’s ambassador was legally the same thing as his monarch when, say, negotiating a treaty with a distant power. Take it out a step, and you’ve got the representative of, say, the East India Company personating the entire Company, as a body, when negotiating with the Maharaja of Wherever — corporate personhood, see?

Take it out a step further, and there’s social contract theory. Hobbes’s Leviathan isn’t necessarily a monarch, let alone any given individual ; Hobbes clearly says that the Leviathan can be a senate or something like that (though, of course, he considers that a very bad idea). Rather, the Leviathan is the corporate person of the people. When we enter into the “social contract,” Hobbes says (though he doesn’t use that exact term), we create the Leviathan, in whatever form, to personate us. That’s why Hobbes could — and did — pledge his allegiance to the Protectorate after the execution of Charles I, even though the physical person of Charles Stuart, son and heir of the executed king, was right there in Paris with him at the time.

Feel free to tell pretentious Lefty college kids (I know, I know, BIRM at least 2x) to stick that in their pipe and smoke it whenever they start going off about the evils of “corporate personhood,” but it’s also important now, because that’s how modern politics is supposed to work, too. We use the word “represent,” not “personate,” but the concept is exactly the same — that clown we send to Congress as our “representative” is the corporate person of his district. He is supposed to do nothing less, and certainly nothing more, than represent us, the sovereign people of OH-10, in the nation’s capital. If he does something against our interests back home in Dayton, he’d better be able to come up with a damn good explanation. If he can convince us that he did it in the service of some larger good in the long run, we’ll keep him in office; if not, we’ll vote his ass out, and God help him if he did it for base personal reasons….

You see where this is going? That’s what all that “civic virtue” stuff they used to teach in junior high meant in practical terms. We could trust Joe Schmoe to personate us, because we knew him and he knew us and we all lived in the same community together, and even though he was temporarily sent to Washington to conduct our business, he’d be back here eventually — he served, literally, at our pleasure, and he’d have to live with the consequences, for good or ill, when he finally came home.

In Africa today, as in the Europe of yore, the situation is vastly different. There, a government “job,” like any job, is a gravy train for the entire clan. If you get one, seventeen brothers and uncles and cousins and in-laws will immediately descend upon you, expecting you to get them “jobs” too… or, failing that, to finance their lifestyles. It’s a crushing burden, which is why the very first thing the African “official” does is start squeezing everyone and everything for every possible penny. They’re not corrupt because they’re lousy people (or, at least, it’s not just that) — they’re corrupt because they can’t survive in their culture any other way. They’re the Big Man of their clan; they have obligations.

Take that up the chain, and there’s your African “politics.” The Big Man at the top is just the Biggest of the Big Men — he can get you appointed Commander-in-Chief of the Air Force, for example, while the little Big Man just starting out can maybe get you a “job” in the post office. Take it across the water, and that’s why there’s zero entrepreneurship in the “African-American community.” There’s a reason any Black with anything on the ball goes into politics or academia, rather than opening his own business — if he opened an auto repair shop, let’s say, he’d immediately be overwhelmed by cousins and friends and babymommas expecting him to fix their rides for free. (See also: Every single pro athlete and his posse).

But American politics, being the end product of several hundred years of that “civic virtue” stuff — even when it was honored more in the breach — isn’t supposed to work like that… which is why, if you want to be an American Big Man, you need to deck yourself out as some kind of revolutionary. Even “machine” politicians like Boss Tweed — until recently the closest thing we had to an out-and-proud Big Man — paraded himself around as some kind of proto-Social Justice Warrior, helping all those poor Irish immigrants out of the goodness of his jewel-encrusted heart.

And then came the Clintons. As the Z Man notes today, the last pretense of objectivity disappeared from public discourse during the Clinton administration. Bill Clinton was always and everywhere on the lookout for number one. But more than that, it was Bill Clinton’s sheer vulgarity that really opened up the Big Man era of American politics. Plenty of Presidents have had affairs — James G. Blaine made Grover Cleveland’s love child one of the mainstays of his campaign in 1884 — but not even JFK was gauche enough to get serviced in the Oval Office. Only Bill Clinton did that, and he did it, quite frankly, because he could. I’m as cynical as one can possibly be about mass democracy — when it comes to “the People,” I make Joseph de Maistre look like Wavy Gravy — and even I am still shocked, all these years later, at the sheer brass balled shamelessness of the Clintons, mother, “father,” and daughter.*

And yet, this misses something important about the Clintons. Even they, grotesque as they were, talked a good line about peace, love, and understanding. It’s almost impossible to grok now, but back then, Bill and especially Hill pitched themselves as the embodiment of Flower Power. They were the avatars of the Baby Boom, whom hippies manqué everywhere could vote for and finally, after all these years, solve that bothersome situation in French Indo-China. Seriously, does nobody remember this

or this, fer chrissakes? 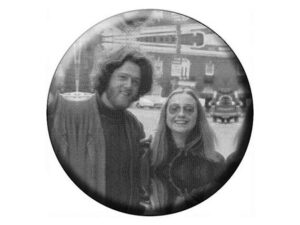 Absolutely nothing could be more flattering to raging Boomer narcissism (BIRM at least 2x, I know) than the candidacy of Billy and Hilly, those two groovy throwbacks who promised us a return to Camelot. By making Bill Clinton the Man, we would, as a nation, finally stick it to The Man for good.

(I know, I know, it makes my brain hurt, too, but trust me, it happened, I was fucking there. In many ways I’ve still got the migraine).

It was a kinder, gentler revolution they promised us, but make no mistake, it was a revolution. They were quite explicit about it…

…which is why it was no surprise, even to their supporters, when they started carrying on like Big Men.

*since Wiki’s so desperate for non-African examples of Big Man-ism, let’s give them Chelsea Clinton, holder of advanced degrees (and, of course, a bachelor’s “with highest honors”) from no less than four prestigious institutions: Stanford, Oxford, Columbia, and NYU, where she also currently “serves” as an assistant vice provost. Madame Ceausescu would be jealous.

4 thoughts on “The Big Man”