There are enough rotten chestnuts in this video to stink up Madison Square Garden.  Let’s knock out the most obvious one:  the assumption that “the rich” are a corporate, permanent group.

In the real world, of course, punitive taxation on “the rich” leads to no more rich people in pretty short order — the Econ 101 maxim “if you want less of something, tax it” has held since taxes were paid in goats.  If you define “rich” as X dollars per year, every taxpayer in America will make damn sure that his annual income is $X-1 …. and will simply stop working the minute his paycheck threatens to crack the barrier.

I simply can’t believe that the left doesn’t know this.  Marxism makes even smart people dumb, but not that dumb.  Something else is going on here.

I have two theories, neither of them flattering to our friends across the aisle.  The first, probably correct, one is that the elimination of “the rich” is in fact the goal — “tax the rich” is just the political expression of destructive envy.  I haven’t fully thought through the second — hence this post — but it goes something like this:

The left not so secretly longs for stasis.  The ideal leftist world is in fact a medieval world, a feudal world, secure and ordered and above all legible. 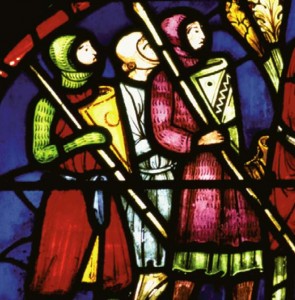 There’s some basis for thinking this in the left’s intellectual pedigree.  Classical Marxism allows for no intermediate state between “capitalism” and “communism.”  Utopia exists across the chasm of The Revolution; “Progress,” in the sense the Obamatons use it, is impossible, since capitalists will by definition never surrender their power(pre-1917, communists hated “moderates” and “socialists” more than the capitalists themselves, because compromise only delayed the violent overthrow of the state).  This is a harsh worldview, but nonetheless comforting to limited thinkers — there are nice bright distinctions between Good and Bad; there’s a readymade explanation for one’s feelings of impotence; and of course there’s the pleasure of having an intellectual justification for one’s hate and rage.

And with that, we’re firmly in the Middle Ages.  For just as the medieval worldview pinned all its hopes on an unprovable afterlife, so too the socialist utopians pinned their hopes on a Revolution that by their own definitions could never happen — in all 50 volumes (!!!) of their collected works, Marx and Engels never got around to explaining just how the light of revolutionary truth could ever break through capital’s total control of all social institutions.

In other words: The socialist trinity of proletariat / bourgeoisie / capitalist is just the feudal pyramid of nobility / clergy / commons in modern dress, just as the Marxian “dialectic” thesis / antithesis / synthesis (the doctrinaire explanation for the breaking of Revolutionary dawn) is nothing more than Father / Son / Holy Ghost slathered in Hegelian squid ink.

I can’t prove this, of course (and I’m sure any grad student worth her salt could pound out 6,000 words about why I’m wrong at the drop of a Birkenstock) but it makes psychological sense.  I’m hardly the first guy to point out that Marxism is an emotional tic, not a philosophy — since they’re so singularly incapable of separating a proposition’s content from its speaker, Marxists want to enforce a strict congruence, not between word and deed, but between word and appearance.  How many times have we heard, for instance, that Sarah Palin “isn’t a real woman,” or that Clarence Thomas isn’t “really” black?  There are medieval parallels — a real rise in the standard of living was almost always accompanied by new sumptuary laws, for instance, and while heretics could be reconciled to the Church and infidels baptized, both were forced to wear special badges in perpetuity.

Thus the Marxist world, like the medieval world, is a legible world.  Since all eyes are fixed on the impossible future, they want to know at a single glance where everyone stands in the social hierarchy of the here-and-now. Our Obamarxists have fixated on the nice round number $250,000, I think, largely because it looks so plump there on the page — not so large as to be meaningless to the average taxpayer (the way, say, $1,000,000 would), but certainly big enough to pass the sniff test of “rich.”  And when that proves insufficient, of course, they’ll just move on to another number — $100,000; $75,000 — because the point isn’t the dollar figure, it’s the label.

They need to know who to hate, you see.  And since we can’t make conservatives wear special badges (yet)……

5 thoughts on “The Left and Feudalism”