UPDATE 9/20/2014: Moshe Ben-David at The ComPost Files has some further thoughts, and some name suggestions.

Confucius say that all political problems boil down to using words incorrectly.

No, really, he said that. And he’s right.  For instance, Morgan linked to a piece which linked to a study that said both liberals and conservatives are equally authoritarian, provided the authority who’s speaking is on the listener’s team.

Then someone named News Junkie at Maggie’s Farm, riffing off this, summarized the political developments of the last century thusly:

Since the Progressive Era, what is termed “Liberal” has been increasingly illiberal.

Today, Conservatives are the Freedom people and Liberals are the statist-control people.

Which made internet liberals furious, because of course they’re the freedom people!  Liberals only want Good Things, and Freedom is by definition a Good Thing, so QED, h8rz.

Buckle your seatbelts, y’all — It’s about to get Confucian up in here. 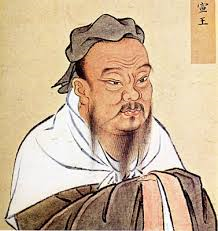 The good news is, I came up with a simple, straight-line, two-category system that explains all modern political behavior.  The bad news is, it requires a tiny thought experiment, which means no “liberal” — or, you know, whatever — will ever understand it.  But for the rest of you:

I’d like you to ask yourself a question.  How did Goverment come to be?

Not this or that particular government, like America or Mexico or the Babylonian Empire.  I mean the whole shebang, capital-G Government.  Great thinkers and college freshmen alike have pondered this over bong hits since humanity first came down from the trees, and their answers have always fallen into one of two groups:

Group A argues that it’s basically a contract.  A group of individuals, each as sovereign as his physical power can make him, agree to cede some of their rights to a collective, in order to better secure their remaining rights.  The key player here is the individual.

Group B argues that government comes from somewhere Out There.  Maybe it’s God, maybe it’s Historical Necessity, maybe it’s the Flying Spaghetti Monster, but whatever it is, it imposed government on us.  The key player here is Something Out There, whatever it may turn out to be.

With me so far?  Now, apply them to basic history.

Here’s where it gets tricky.  Because our modern freethinking iconoclastic individualist rebel “liberals” want to put themselves in column A, and conservatives in column B.  And they’ll point to their favoritest historical event of all time, the French fucking Revolution, and they’ll say “yes!  That’s where the terms ‘left’ and ‘right’ came from!  The supporters of God-ordained absolute monarchy sat on the right of the king in the Estates General, and everyone who was against that sat on his left.”

The Jacobins’ ideal goverment came from Something Out There, too — just like King Louis’s.  In the Jacobins’ case, it was called the General Will, and it was just as arbitrary, capricious, and despotic as any individual’s will.  Specifically, it was as arbitrary, capricious, and despotic as Maximilien Robespierre’s will.  Robespierre thought Rousseau was really on to something with that whole “force men to be free” bit — especially the “force” part.  But he’s not just guillotining anybody who looks at him cross-eyed; since we’re all subject to the General Will, you’re actually guillotining yourself.

In other words: The Jacobins and the Royalists were both in column B.  Nobody was in column A.

At this point, any liberals with unexploded heads are probably yelling “but what about George Washington, Thomas Jefferson, James Madison?  They were in column A, and they called themselves liberals.  Suck on that, h8rz!”

And that’s why we need Columns A and B.  Washington, Hamilton, and the rest of the Founding Fathers most certainly were in column A.  And yes, they gloried in the name of “liberal.”  Problem is, those guys — you know, white male patriarchal slaveowning gun nuts — have nothing to do with modern “liberalism.”

Washington et al were very firm believers in the social contract theory.  You can tell from that whole “we, the people, in order to form a more perfect union” thing they all put their names to, and shed their blood creating.

Your modern “liberals,” by contrast, clearly are not.  Again, ask them the one simple question posed at the top of this piece:  Where does Government come from?  Or — since they won’t answer — ask it of yourself.  What would they say?

Indeed, where could it possibly come from, other than Somewhere Out There?  To modern “liberals,” the only true and immutable things — besides their own superior moral sentiments, of course — are Race, Class, and Gender.  It’s their holy trinity, and compared to modern liberals, Torquemada is merely lukewarm about Catholicism.  But here’s the catch:  Those three categories are incompatible.  For example: roughly every rapper ever has assured us, and Jesse Jackson agrees, that “it’s a black thing, you wouldn’t understand.”

How, then, is a social contract with them even possible?

Yeah.  Apply as often as needed, to any and all groups in the glorious Rainbow Coalition.

Modern “liberals” are Column B people to the core.  Their Something Out There used to be called “synthesis” back when Hegel was preaching it.  Karl Marx and his fluffers called it “dialectical materialism,” while run of the mill groupies called it “the Laws of History.”  No matter the name, the idea was the same: Something Out There was in charge.  Humans had no agency outside of their social class, because in a very real sense they were their social class.  “It is not consciousness of men that determines their being,” Marx declared, “but, on the contrary, their social being that determines their consciousness.”

Chew on that for a sec.  You literally cannot think otherwise than what your “social being” tells you to.

At this point, all logical people are rolling on the floor laughing, because that means change is impossible, and all Marx’s vaunted “dialectic” is just polysyllabic horse hockey.  How can we possibly change — or even recognize — our “social being,” if it’s thinking all our thoughts for us?  Marx didn’t actually have an answer (though you’re welcome to pore through the 50-odd volumes of his collected works looking for one), but it doesn’t matter, because Lenin did. It was: “Shut up, that’s why,” and when delivered at gunpoint while your entire family is being shipped off to Siberia, it’s remarkably persuasive.

It’s not quite so effective without the guns and the labor camps, but damned if our modern Column B types aren’t giving it their very best shot anyway.  Ask Brendan Eich how that’s going.  And it logically follows, doesn’t it?  If government comes from Out There, then individuals by definition have no rights the government is bound to respect.  If it’s really just a matter of which race/class/gender pulls the levers of power, then by God make sure it’s your group doing the pulling.

So: Column A, Column B.  It’s that easy.  And if you think about it, this resolves a lot of apparent contradictions.  Your Jerry Falwell types, for instance, are routinely called “conservatives,” and since he’s very obviously not a Marx-n-Mao-n-Marcuse lefty, we’re tempted to assign them to Column A.  But:  Falwell is part of the “religious right.”  His ideal government comes from Out There, and guys like him have no problem squashing secular liberties to speed the Second Coming along.  He’s “conservative,” “red state,” blah blah blah, but he’s a Column B guy to the core.  Similarly, Ronald Reagan used to be a hardcore Democrat, a union organizer, etc.  When he said “I didn’t leave the Democratic Party, the Democratic Party left me,” he was expressing his true allegiance to Column A.

The names change, but the game’s the same.

Find a person who believes that govermnet is created by, and exists to serve, individuals, and you’re in Column A, regardless of what that person calls himself — or whatever label media butt boys and their internet troll ass lickers try to hang on him.  Find a person who thinks government just kinda happened, and can’t talk about anything but vague categories of people, and he’s in Column B, no matter what he calls hiimself.  Yes, even if he calls himself a “libertarian.”

Column A, Column B.  We need catchier names than that — I look forward to your suggestions — but it’s really that easy.