Said Lenin, or maybe it was Bakunin, but y’all get the point. We need more of this (Ace of Spades link):

In a Monday op-ed, the Washington Post called on heavyweight telecommunications corporations to shut down conservative cable news outlets including Fox News, One America News, and Newsmax TV, comparing the need to do so with that of shutting down foreign terrorist influencers.

“There is a whole infrastructure of incitement that will remain intact even after Trump leaves office,” Boot writes. “Just as we do with foreign terrorist groups, so with domestic terrorists: We need to shut down the influencers who radicalize people and set them on the path toward violence and sedition.”

The essay then heaps praise on the recent purging of conservative voices on social media platforms by tech giants, hoping that broadcast media will follow suit.

Max Boot is a fake-“conservative” NeverTrump SSDS — that’s “sociopathic, sexually deviant shitweasel,” please update your lexicons accordingly — who not coincidentally looks like this: 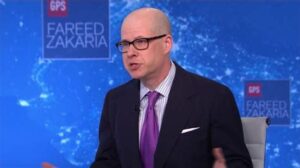 There’s a short game and a long game being played here, kameraden. We can ignore the short game, as it’s just virtue-signaling. I’m not saying there won’t be purges — rest assured, there will be, and have you signed up for the backup newsletter yet? — but not just yet. Zhou Bai-Den and his cronies have bigger things to worry about, as that stupid little sorority girl recycled from the Obama administration said about Zhou breaking his own idiotic mask rule within hours of signing it.* They’ve got industries to wreck and wars to start; Fox is great for rallying the bomb-everyone crowd (their few remaining viewers are, of course, Toby Keith-style flag-sucking diehards).

What this is, in other words, is the SSDS crew finally waking up to the fact that massive, open, gleefully in-your-face electoral fraud means they don’t need your stupid ass any more, Max. The jig’s up. This is the “March Violets” phase of the Gleichschaltung, in which so many of our former countrymen realize they were really SJWs all along. In those conditions, grifters like Boot have to amp it up to 11; I wouldn’t be surprised to see these clowns calling for literal firing squads before too long.

The long game is where it gets interesting, and I for one couldn’t be happier. A total purge of Fox News would perhaps be the only thing that could slap some sense into Normie. It would be far, far better from the SSDS perspective to let that stupid station continue as it is — SJW lite, with a few flag-waving montages. You’ve got to boil the frog slowly, boys. Alas for them, they’re feeling their oats, and since they’re so incredibly stupid, they’re going all the way right away.

We need to encourage this, comrades. Urge them to be as ridiculous and over-the-top as possible. Maybe we can even get Max Boot up there to lead one of the Einsatztruppen. The very sight of that goof in a tank helmet, Mike Dukakis-style, would be worth 10 divisions to our side.

*Great to see her back. I’m serious. I love those types — the ones who were the chunky cheerleader in their little tiny high schools, and got into politics to compensate. Jen Psaki, Marie Harf… (oh, those problem glasses!) I spent my entire college career chasing exactly this type of girl. It’s a real tweak in the nuts. 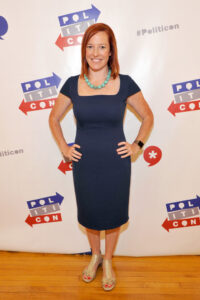 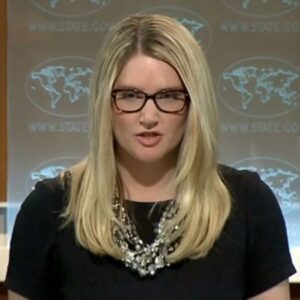 UPDATE: Since we’ll all be required to learn Chinese anyway pretty soon, let’s start with this: Baizuo. It means “White Leftist” and it is NOT a compliment.

As noted in the comments, this is the high tide of freakery in the Country Formerly Known as America. Zhou Bai-Den’s administration is their Summer of Love, their Woodstock; they will never have it better than this. Why? Baizuo, baby!

Since the Left live completely in fantasyland, they remain invincibly ignorant of what every Dirt Person knows — the Pox hate that crap. Sexist? Homophobic? Sheeeeeit, nigga, you ain’t seen nothin’ yet. And while our Chinese overlords are happy to use “intersectional” nonsense to help us destroy ourselves, they have zero tolerance for it where they’re in charge…

Consider the obvious fact that Zhou Bai-Den himself is not long for this earth. That’s not a threat, FBI goons, that’s just medical reality — folks with advanced dementia, which Resident Salute-the-Marines very obviously has, don’t live too long. And even if he doesn’t croak in the immediate future, the Cabal will soon find babysitting him more trouble than it’s worth, so all hail President Kamala. Whaddaya think her cabinet is going to look like?

Rashida Tlaib at State. Ilhan Omar as SecDef. AOC at Justice. You think those fine upstanding ladies are going to tolerate a White guy in a dress flouncing around the Imperial Capital giving orders? It’s going to be nonstop Freaknik there behind the razor wire in a year, year and a half tops. Trannies, furries, all that ComicCon shit… those are things which Homie most definitely does not play.

Which is why we need to encourage it for all it’s worth, kameraden. That tranny from Pennsy is just the #2 organism at Health and Human Services. Why not #1? Transphobia, obviously. And Zhou’s administration is woefully light on Furries. They need to get somebody dressed as Tigger into a top post, stat. Necrophilia, bestiality… you can’t tell me there aren’t Washingtonians who are into that. Let your freak flag fly, guys!!

9 thoughts on “The Worse, The Better [updated]”