First up, apologies to new reader (?) Jacques, whose comment on that goober from Monday as “pretty much the Platonic form of an leftist asshole” is spot-on, but got buried due to the comment moderation thingie. I’ve monkeyed with the settings, but being tech-illiterate sometimes these things happen. I wasn’t ignoring you, brother – I’m just falling down on the job re: hosting.

Yeah, I’m sure she knows all about it. One big downside of getting back into a regular weightlifting routine — aside from the pain and weakness and reminders of the injuries that sidelined you in the first place, of course — is that the gym has tvs everywhere, and they’re all but impossible not to watch. Most are just sportsball nonsense — we all desperately need to know what LeBron thinks about Shitavious’s tweet about LaQueefa — but there’s always one tuned to one of those daytime chat shows for some reason, and I can’t avoid the occasional glimpse.

From one of them, I learned that this bint has a book out purporting to teach us how to raise boys. No, really, that’s what it’s called: “To Raise a Boy: Classrooms, Locker Rooms, Bedrooms, and the Hidden Struggles of American Boyhood.” I urge you to click the link, to her Washington Post bio. There’s a picture, which says it all — yep, I’m sure masculinity is just one of the many, many, many, many, many things she’s completely expert on. The still from this video is even better. Take a look — it’s 100:1 her “son” was conceived with a turkey baster. It’s 50:1 the sprog merely “identifies” as a boy, but if it’s actually a biological male, it’s 1,000:1 it’ll have bespoke pronouns by the time it hits high school, at which time it will discover that xzhey are really a girl. Phrenology, as always, for the win.

Update your style guides accordingly. Via Ace of Spades, a glimpse into the future. Really, the only surprise here is that it’s Colorado, not California.

…SB21-132, Digital Communications Regulation, which if passed, would fine websites $5,000 per day as a class 2 misdemeanor if they “allow” user comments that:

A “digital communications division” would assume responsibility for licensing websites.

Fortunately, The Media have shown us the proper way to promote hate speech; undermine election integrity; disseminate intentional disinformation, conspiracy theories, or fake news; or authorize, encourage, or carry out violations of users’ privacy: Quote “administration sources” claiming the Russians did it, or that it’s “White Supremacists.” See below.

Administration sources say that totally legitimate President Biden, whose election was completely on the level in every way, has appointed embassy staff to Our Glorious Overlords, the People’s Republic of China, who really enjoy the Butt Swabs of Perfect Health. “We’re just doing our part, baby!,” moaned one official, “and any reports otherwise are Russian hacking.” In other news, a cabal of White Supremacists is reportedly asserting that Joe Biden, whose election was totally not fraudulent, is a human rutabaga suffering from advanced Alzheimer’s. Anyone heard disseminating such blatantly fake news should be reported immediately to…

Please note that, in the spirit of bipartisan unity which our Benevolent Overlords have ordered us to observe, any comments not in the New and Improved Newspeak will henceforth be deleted.

The great thing about this particular one is that it somehow, some way, seems to have no connection whatsoever to Cat Fancy (advanced hobbyists no doubt recall the “Strength Through Joy” organization, the most porn-sounding of all Third Reich bureaucracies, but their logo was a lot more in-your-face). Who knows, maybe it’s the unit patch of the Fourth Waffen-SS Mechanized Field Kitchen or something, but a brief google search says otherwise: 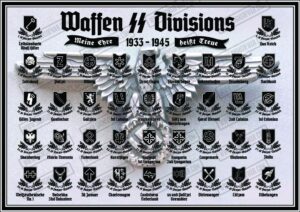 (Chart included strictly for your reference, such that, in line with the New, Kinder Gentler Newspeak comment policy, you don’t accidentally enter some ASCII code that might kinda resemble one of these. Can’t be too careful — kids these days can barely read, but you never know who has memorized all the unit badges of obscure military formations from 80 years ago).

Anyway, every town of any size probably has a screen printing or embroidery shop that’s really hurting right now. Order up some “Wunjo” gear, and wear it with pride! I recommend white runes on a black background for maximum fuck-with-ery, but feel free to accessorize. You do you, gang. Help stimulate your local economy!

Better yet, it’s plausibly deniable — if some triggered SJW does try to dime you to the Thought Police, you can say it’s just a stylized letter P. For “Pittsburgh” or “Pawtucket” or “Polymorphous Perversity” or what have you (be sure to give the cop the secret shitlord wink and the OK sign, just in case he’s based. For max bonus points, drop a Rotten Chestnuts reference. Maybe he’s a reader — there are, after all, at least 20 of us!).

Best of all, it seemingly really does mean “joy,” and that’s the one thing SJWs truly hate. Being congenitally incapable of happiness, or even contentment, nothing tears at their guts like the sight of a normal person being happy. Be happy, y’all — it’s good for the soul, and it’s the second-best revenge you can take on these sick fucks. Wunjo!!!!