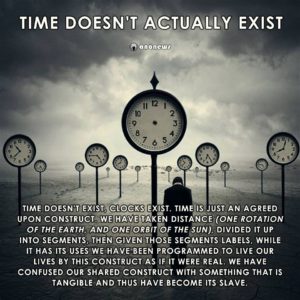 The argument goes like this:  Time doesn’t exist because the units we use to measure it can’t be found in nature. (They can, actually, we may get to that later).

The fact that 3:02 PM on a Tuesday is just a social construct doesn’t mean that time doesn’t exist.  This is an important distinction.  Failing to make the distinction leads to all sorts of logical folly.

In a conversation with Severian a while back, we noted that sophists started this whole deal (or more accurately, perhaps, popularized and formalized it) where we confuse the words we use for things for the things themselves.

I commented on the photo, basically saying what I just wrote above, adding “trust me, time exists.”

To which my friend replied, “we’ll just have to agree to disagree on this one.”

Now I know he’s intelligent enough to understand what I’m saying and just wasn’t following at the time and was not interested in trying, so I just dropped it.  But it was clear he was stuck on the language of the photo posted and saw what the truth in it is — and went with the conclusion.  I wasn’t arguing the facts stated in the post.  I was arguing with the two conclusions, that 1) Time doesn’t exist, and 2) that time as a social construct makes us slaves to it.  Time, that is.  The thing that doesn’t exist.

My immediate thought was “we’ll have to agree to disagree”.  By “we’ll” I assume he means “we will”, which means starting at some point in time and going forward.  In time.  Which doesn’t exist.

If time doesn’t exist, then not only is there no future, there is no now.  And if there is no “now”, there is no “is”.  So I, who apparently do not exist in the first place, just “proved” that nothing exists.  Which is a tall order if you parse that sentence at all.

I recall a story from Zen Buddhism that basically went like so:

The master asks the student some koan (I forget what it was), and days later the student comes back and proudly answers that nothing exists.  The master then slaps him across the face and asks, “then what was that?”

Confusing language for reality gets us in a lot of trouble, quickly, especially when we start substituting reality for language — which is the direct opposite of what language does.  Reality is reality, language is the abstract.  It doesn’t mean reality is abstract.

It gets us into lots of trouble in all sorts of subject areas.  And politicians, the main consumers of sophistry, use this to great advantage, every day.

As far as the “slave” thing goes … the social construct of 3:02 PM on a Tuesday was created so we, who are by nature social beasts, can better cooperate with each other. If anything, we are slaves to our nature.  But that should come as no surprise.  Everything is.

But if time doesn’t exist, then morality certainly doesn’t exist.  We can find no physical evidence of it in nature, right?  So who cares?  I digress.

The same thing is being done with gender right now.  In nature, humans are male or female (there are a few biological aberrations, but everyone by and large is one or the other).  Now, there are certain personality traits we associate more with one gender or another, and we have taken to some standardized ways of expressing ourselves accordingly.

But what have our modern sophists done?  They have taken these expressions, this “language”, and substituted them back into the reality of gender, claiming that gender is just a social construct.  But no, it is the expressions that are social constructs.  Gender remains what it always has been.  But the sophists insist that it is not.

What this boils down to is a war on society.  The assumption is that social constructs are arbitrary and therefore worthless.

But “worth” is also a social construct.

So I guess I can officially opt out of this conversation.

12 thoughts on “Time Doesn’t Exist – and other Sophist nonsense”