Saw this video … “What’s Wrong With Saying All Lives Matter?  Don’t They?”

Yes, they do.  The people who are saying it agree with you.

I do understand what “Black Lives Matter” is supposed to mean. And if it stopped there, with people marching in the streets, there wouldn’t really be a controversy.

But it doesn’t. This first came to light in Ferguson, MO in 2015 when this phrase made its way into the lexicon as known in every household. (A similar thing happened with Rodney King in LA in 1991. Rodney was not killed, and to his credit later famously asked “Why can’t we all just get along?”)

What happened in Ferguson?

Riots, vandalism, and fires. Multitude of minority-owned businesses destroyed. People getting shot in their cars. Cops being shot and killed just for being cops. And here’s the kicker — there was a serious attempt to justify all of this by the media, and by the more visible leaders in the BLM movement itself.  Law enforcement was told to stand down and let. it. happen. Media agreed.  Story after story about the violence being justified.  (The anger and the violence are two different things – but not according to the media narrative).

That’s when they lost people. “Black Lives Matter” turned into an excuse to lash out against innocent people. Coupled with the racist concept of “White Privilege”, it became an attack … on people … based on race.

You can’t get any more racist than that. If you don’t see the danger in justifying any form of racism – and they do want systemic justification here that legally treats one race different from another in an attempt to “correct” existing racism — you’re ignoring a time bomb.  (Or maybe you’re building it.) 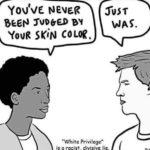 It is argued that it’s NOT negative, and all that’s being asked is that it be acknowledged.  Here’s a hint. If your rhetoric causes large groups of white people to come together to  “denounce” their “White Privilege” – then you have made it a negative thing.  The sad thing here is that the next time any of these people run into someone who thinks they are inherently racist because they are white will not have any way of showing that their white privilege has been “denounced”.  They don’t get a denunciation card, or a tattoo on their forehead.  Their skin is white.  If anyone should be able to understand that kind of judgement, it should be black people.  (But that might bring us together, so we can’t have that.)  In other words, their religious ceremony here did nothing but make them feel better for a few minutes.

You cannot fight racism with racism. Racism is wrong not because of the race being discriminated against. Racism is wrong because it is inherently unfair to the individual person, like Chris Thomas.

Chris Thomas, being a law-abiding citizen, has very little chance of suffering the fate of a Rodney King, or a Michael Brown, or a George Floyd, precisely because of the way he has lived his life, the choices he has made — he is very unlikely to be engaged in an activity that is going to result in a summoning of law enforcement — UNLIKE the people I just mentioned. And if he does, say, get pulled over for speeding, he is probably innately aware, as are most of the rest of us, of how not to get your ass kicked by the police (which is a different topic than should the police be kicking your ass at all).  Chris Rock, like Candace Owens, was not wrong.

Now I acknowledge that because of racial stereotypes there could be a greater chance that, say, someone like Juan Williams might cross the street to avoid an unnecessary encounter with a young black man giving off certain social (in this case anti-social) signals. Signals I’d be willing to bet that Chris Thomas doesn’t give off. This is an issue that needs to be addressed.

The blame for much of the misconceptions around this lay directly at the feet of the people in Chris Thomas’ profession. In this very piece he says he feels like black lives don’t matter because, (note the irony of where his information comes from) “it’s scary when I read headlines like this in a major newspaper:

Which is at best misleading. And it’s coming from the media. You want to know what the leading cause of death is for young black men (late teens to late 20’s) is?

Homicide by other black men.  Not allowed to point that out without being excoriated as racist.  But it’s a fact, verifiable on the CDC’s website and other sources.

For black men in their mid to late 20’s, “Police Force” accounts for 3.4 percent. Which is high compared to other races.

The question is, why?

If you answer anything other than “racism”, you are immediately and widely scorned and excoriated.

But what if it isn’t?

The fact that you will also immediately get excoriated for merely asking the question (ask Candace Owens) points to the fact that the problem is not being taken seriously. Let’s put it another way. What if we’re trying to solve the wrong problem?

If we are, it will never get better, will it? And we DO want it to get better … right? Can we at least agree on that?

If your faucet is leaking, and you think it’s a bad gasket, but it’s really a crack in the valve, constantly replacing the gasket will not fix the problem.

If you are forbidden to ask “what if it isn’t the gasket?” you’re never going to get the root of the actual problem addressed.

So the next question you’re not allowed to ask, or if you do you cannot answer anything but “obviously, racism” is … why are a disproportionately high number of young black men involved in these activities?

If you can answer that question without just sticking to the “R” word, and really honestly discuss the social influences not only outside, but inside the black community – and the fact that there is such a thing as a “black community” rather than just a community is part of that problem — you can begin to address the problem.  There are a lot of black people who agree with me here, but they can’t say it without being alienated as an Uncle Tom House N*****.

And if you think the problem is the Police — who are coming to protect black people mainly from from young black men and your solution is to defund the police, may I humbly submit that you’re out of your damned mind.  Black Lives are not what matter to you – your addiction to virtue signalling is.

Until then, it’s 1) young black man gets killed by a police officer 2) Protests and riots ensue, aimed mainly at people who cannot address the core problem and further alienating them, and 3) Repeat.